My cousins took us through the back streets of Sydney to Cabramatta for lunch. We went to a restaurant that specialises in sugar cane prawn wraps. I've never had this dish before but boy was it good. Minced up prawns are coated around sticks of sugar cane then grilled to perfection. These arrive at the table with squares of rice vermicelli, a basket of herbs, a small container of fish sauce (for dipping), dried rice paper sheets and a bowl of boiling hot water. Then it was a (simple?) case of assembling the meal at the table. This procedure first involves softening the rice paper in the boiling water. Once softened, the rice paper was used to wrap a sliver of the grilled prawn, vermicelli and herbs. After wrapping, the whole thing is dipped in the pungent fish sauce before consumption. Delectable. 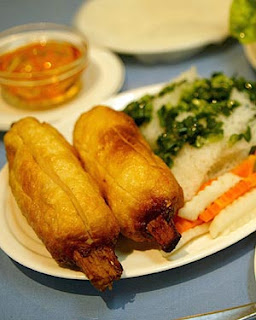 In the evening, Nate and I met up with some friends and headed off early to Oxford Street to stake out a spot for the mardi gras. We managed to get a prime position right at the start of the parade route then waited (and waited). Eventually the dykes zoomed past and the parade began. 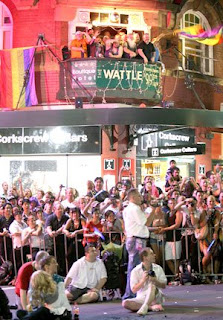 The atmosphere was fantastic. I even managed to see someone I knew marching along in one of the floats. He was clantily dressed in a leather outfit with the bears, which was quite a contrast to the softly spoken, conservatively dressed person I knew him to be (the sort of guy who always wore his polo shirts with the top button done up). We left just before the parade ended, weaving our way through the crowd, the rubbish and the streams of urine trailing down the side walk near Elizabeth Street.
Posted by Adaptive Radiation at 7:29 AM