A conversation this past week with a (straight) work colleague ventured into the topic of monogamous relationships. The colleague's best friend, who happens to be gay, married his same sex partner a few years ago in NZ. Since then, my colleague had regarded his best friend as the ultimate example of a committed monogamous relationship (gay or straight). During the conversation with my colleague, he recounted the shock and horror of learning that his best mate was, in fact, in an open relationship.

This conversation reminded me of a story told by one of my lecturers when I was studying at uni...

This is a dunnock, a drab, unassuming (some might even say, prudish) little bird from Europe and parts of Asia. 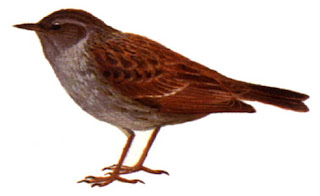 Back in 1853, a Reverend Frederick Morris urged his parisioners to turn to the Dunnock for guidance on moral behaviour. The Reverend wrote that the dunnock "exhibits a pattern which many of a higher grade might imitate, with advantage to themselves and benefit to others through an improved example." I guess the poor Reverend would have been turning in his grave when, more than a century later, the latest advances in paternity analyses revealed the dunnock to be, in fact, a highly promiscuous species.

So much for monogamy.
Posted by Adaptive Radiation at 9:53 AM

Monogamy... my housemate Shane can't even say the word. It always comes out as mahogany.