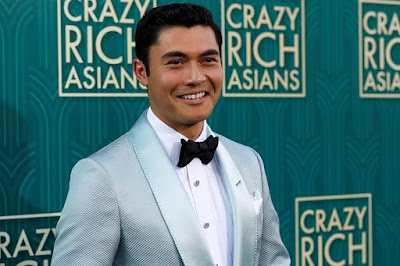 Crazy Rich Asians has attracted a lot of media attention. Not since  The Joy Luck Club (which was released way back in 1993) has a 'mainstream' Hollywood film featured a predominantly Asian cast.

It's been interesting following the media hype surrounding this film – and the lofty expectations. For example, I was surprised to see the actors being criticised for not using their platform at the movie premier to promote Asian fashion designers (seriously?).

The strikingly handsome lead actor, Henry Golding, has copped flack from some media circles for not being Asian enough (he is of English-Malaysian ancestry).

Some commentators have even criticised the film for lack of diversity, suggesting that the film should be renames Crazy Rich East Asians instead.

Get a grip people.


Posted by Adaptive Radiation at 7:23 AM

I heard about the movie two days ago and I haven't stopped hearing about and seeing publicity since. Golding doesn't do it for me, but Shum Jnr, Pang and Png certainly do. Ah, there is our own Ronny Chieng in the movie.