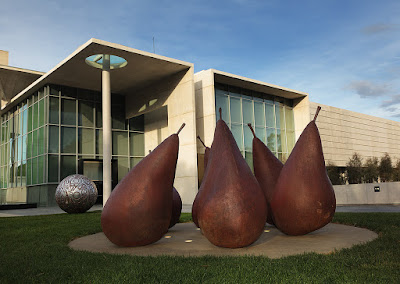 The giant pear sculptures at the National Gallery of Australia are iconic. Until recently, they have been positioned out the front lawn of the Gallery.  A few years ago, I learnt that they were sculpted by an artist called George Baldessin. I have to admit I didn't know much about Baldessin at the time but, after looking into his art, Baldessin has now become one of my favourite artists.

Yesterday, my gallerist friend and I attended a public talk by George's widow, Tess, at a gallery in Collingwood. Tess is a beautiful, dignified and articulate woman. She spoke about her late husband's early childhood, how he was separated from his mother as a baby, his time growing up in Italy during the war, and his reunion with his mother in Melbourne at the age of 10.  She spoke about his genius as an artist. And Tess spoke about the tragedy of his death and how she had to leave Australia after his passing (Tess ended up living overseas for 17 years).  The talk was well attended and the audience was clearly appreciative.

There has been a resurgence in interest in Baldessin as an artist in recent years. And rightly so. He is terribly underrated. He is currently the subject of a major exhibition (together with Brett Whitley) at the National Gallery of Victoria. And on my recent visit to see the exhibition here in Melbourne, it was great to see some of his giant pears in the gallery space.

Posted by Adaptive Radiation at 8:54 AM