Finally went to the National Gallery of Australia to see the post-impressionism exhibition from the Musee D'Orsay. Waited in line for almost two hours. Zipped through the exhibition in 40 minutes. Then waited in line for about 20 minutes to buy my exhibition catalogue.
Posted by Adaptive Radiation at 5:47 PM No comments:

Am back in Canberra this weekend with Nathan to attend the wedding of a good friend from uni. Steve is a truly beautiful soul who found a beautiful woman for a wife. I absolutely adore them both. The pair of them went on a round the world trip two years ago. Both of them were aware that the trip was either going to break or cement their relationship. Steve ended up proposing to Karmi as the pair of them sat watching the sun rise over the Himalayas.

The actual wedding ceremony took place at old Parliament house today and involved both Sikh and western elements (Karmi was born in Oz but is of Indian heritage). It was a really beautiful wedding. And yes, we all danced to crazy bollywood music at the reception! Got to love an indian-style wedding.
Posted by Adaptive Radiation at 11:37 PM 3 comments:

I went shopping for a suit yesterday. I have a couple of weddings to attend in the coming months (including my sister's) and I no longer fit into the suit I bought when I was living in Europe (it musyt have shrunk in the wash).

As a biologist, I don't get much of an opportunity to wear suits... as you can probably imagine they are not at all practical whilst trying to catch animals.

The suit-buying experience is kinda daunting for people like me (i.e. suit-buying novices). First up, there were so many different ones to choose from. In the end, I settled for a black suit from the Saba section at DJs. I figure that black is the most versatile (suitable for weddings AND funerals!).

Second, I find overly beautiful male sales assitants with tight-fitting clothes and shiny faces really intimidating. It makes me feel guilty about paying membership for the gym that I never use. It also makes me feel terribly self conscious for being the only gay man in the universe who doesn't use moisturiser. Fortunately, there was a nice indian girl working at the Saba section and I was able to latch onto her for all my suit-buying advice.
Posted by Adaptive Radiation at 8:37 AM 4 comments:

We all make value judgements. I guess it's human nature. The question is whether we allow these judgements to be ruled by our heart or our head.

I witnessed an emotional outburst from a graduate student last week who verbally attacked another student's research because, in her opinion, an animal ethics committee should never have approved such a study in the first place. The verbal attack was made without any attempt to first appreciate the scientific rationale underlying the study nor, indeed, the strict processes governing the assessment of experiments requiring animal ethics approval. It was an unfortunately misinformed (and a rather self-righteous) outburst driven by the heart.
Posted by Adaptive Radiation at 7:45 AM No comments:

Silly things that make me laugh...

Was reading a recent entry from fellow Melbourne blogger Evolkween who took a photo of an unfortunately named brand of mayonnaise.

Reminded me of this photo I took in France which I found childishly funny, especially given the rather scary-looking contents in the jar: 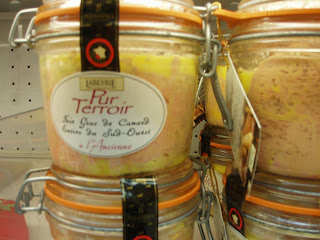 Here is something else that I have been giggling about recently (what were they thinking when they came up with the movie title?): 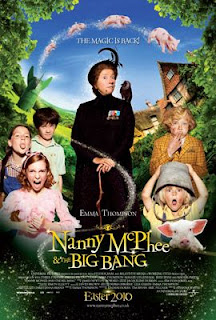 Posted by Adaptive Radiation at 11:30 AM 2 comments:

When I first moved into my apartment, my mantra was definitely 'less is more'. I guess it was a convenient rule to live by since I had brought very little stuff to Melbourne when I moved here 4 years ago. However, since then, I have started to acquire more and more stuff (including a bf and some of his stuff). So, in the end, my once minimilist aesthetic is being thrown out the window and I am finding myself embracing maximalism.

I think my biggest problem is that I'm a collector. And my current vice is art. Unfortunately my apartment is small and two walls are glass so there isn't much available wall space for hanging my rapidly growing collection. For a while, I decided I should stop buying paintings and started to amass sculpture instead (given how much more floor space there is compared to wall space). This is not really a long term solution though since I still want to be able to walk around, and actually live in, my apartment.

So...what to do? I asked this of several people yesterday (and am open to further suggestions). One person said I should buy a bigger house. Another said I could rotate what I actually hang on the walls (and lean all the rests against each other on the floor somewhere in the apartment). I also have been considering this as a last resort: 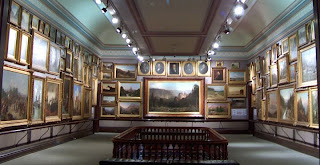 Posted by Adaptive Radiation at 7:40 AM 4 comments:

There were several ocassions last night when I seriously thought I was going to die.

Nathan went down to the Mornington Peninsula yesterday to meet up with his grandmother to take her to Melbourne to attend another grandson's wedding over the weekend. Grandma is a fiesty one and still insists on driving (but needed Nathan by her side to give her road directions). She also hates it when her grandkids call her grandma so we all have to call her Marney instead.

Any how, Nathan and Marney picked me up from work and we first stopped into Crown for dinner. We got Marney a crayfish. She loves crayfish (even the overboiled, tasteless rubbery one she ended up ordering at Margo's inside the gaming area).

After dinner we proceeded up to Eltham (which is near shit creek, two miles east of Timbuktu, just past woop woop).

I must say that as impressed as I am about the idea of elderly people with cars, night driving is definitely not Marney's thing. And Nathan's poor road directions didn't help one little bit. We stopped suddenly several times right in the middle of the road, there were some pretty hair-raising lane changes in busy traffic, and we nearly reversed into an embankment (with centimetres to spare). But we got there in the end.

After we delivered Marney to the motel, Nathan wanted to drive Marney's car back into the city. Given that he is still on his L's (how bloody ridiculous is that?) and that he was half to blame for our near death experiences, I promptly snatched the keys off him and decided that I would drive us home instead.
Posted by Adaptive Radiation at 8:03 AM 3 comments: 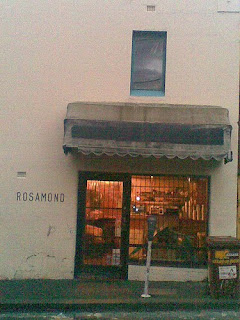 I've found (yet another) great place for brekky. The portuguese sardines on toast (yes, sardines) are delicious.
Posted by Adaptive Radiation at 4:47 PM No comments:

Got back from Lakes Entrance today. What an amazing holiday. On Friday, we stayed at Nowa Nowa in a beautiful house on a hill with a huge lichen-covered deck that jutted out into the Eucalypt forest, with a great view of the Tyers river. Saturday and Sunday were spent in Metung in a quaint little cottage set amongst rollng hills and only a 2 minute walk to a private beach and jetty. I went kayaking and bird watching, swam in the sea, visited art galleries and antique shops, ate great seafood at fancy restaurants, and read design magazines omn a couch in my pjs when it was raining. I was not in Melbourne to see the big storm. I had no access to work email. My mobile ran out of credit. It was fantastic.
Posted by Adaptive Radiation at 10:11 PM 4 comments:

Latest acquisition and catching up with friends

Taking time off can be expensive. Wednesday was art gallery day. I ended up with this: 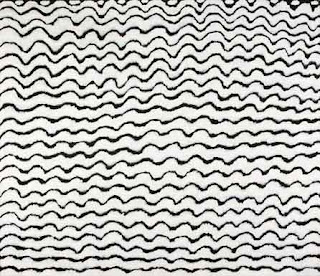 The white lines are meant to be clouds.

Last night was the exhibition opening and I took my friend Sarah to show her the painting and to meet the artist. Sarah is right up there on my list of most favourite people. We met in 2004 at a conference in Europe and instantly hit it off. Sarah's originally from South Africa but has been working in Sydney for the last four years. She is a brilliant scientist and her discoveries have received widespread media interest, with radio and TV appearances. But what I love most about Sarah is her humility. She is amazingly down to Earth and also one of the most genuine and generous people I know.

Tomorrow I'm off to Lakes Entrance to spend a few days with Hanna, another scientist friend, who is on her way down to Melbourne from Canberra via a rather circuitous route. Hanna is a real foodie and I reckon there is going to be some great dining experiences in store. Can't wait.
Posted by Adaptive Radiation at 12:55 AM 2 comments:

Nathan asked me to meet him after work yesterday. When I arrived at the building, I gave him a call and he said he'd come down shortly. I waited for about 10 minutes and then got a call...

Nathan: Where are you?
Me: I'm outside.
Nathan: where?
Me: At the front, near the NAB sign.
Nathan (laughing): Babe, I'm at my other work.
Me: Crap.
Posted by Adaptive Radiation at 7:41 AM No comments:

Had the day off today and decided to spend it with my sister, Joanne, who moved down to Melbourne several months ago. Joanne is getting married in May and has been busy preparing for her wedding so we haven't really had much time to just hang out and do stuff so I thought it would be nice to have a brother-sister day.

After a quick stopover for chai on Smith Street, Joanne and I headed over to Brunswick Street for some retail therapy. At lunchtime, we decided to make quick detour for pho on Victoria street before resuming our retail activities, this time back in the city, where I picked up a nice pair of 'everyday' shoes for work. Before I knew it, the day was over. What a fantastic day too! For the first time, it suddenly became crystal clear to me why gay men were put on this Earth...quite simply, to go shopping with their sisters! We had a blast.
Posted by Adaptive Radiation at 7:02 PM 7 comments:

Weekend in the country 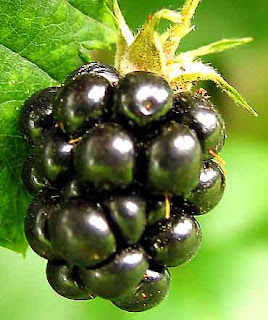 Went back to the country over the weekend. Nathan's sister seems to be doing ok though she reckons the reality of the situation has yet to set in. She feels really bad for the family of the dead guy. The police promised to follow through with their enquiries and try to fill in some of the gaps so she can get some closure. They have also offered counselling. Made me realised that we often think of the family of people who commit suicide but not necessarily the people who discover the bodies. The impacts are a lot more far reaching than I had previously considered.

On a positive note, Nate and I had a great time back in the country. We stayed over at his mum's place in Warrigul and then went to visit his sister and neice on the farm in Yarragon. On the farm, the blackberry bushes were absolutely laden with fruit and I spent an hour with Nathan's neice picking (and pigging out) on the berries. Also took home some stewed pears and apple cucumbers.
Posted by Adaptive Radiation at 7:46 AM No comments: