I managed to hurt my lower back about two weeks ago. Work colleagues, who have seen me waddle around the department have all been encouraging me to do yoga or pilates (I seem to be the only person at work not doing yoga/pilates!). I've told them I'll think about it (the answer is probably going to be 'no').

I was pleasantly surprised that the work he did on my back was able to bring almost instant relief from the original back pain, though he did inflict a great deal of short term pain with his squeezing and poking and pressing.

It's still not 100% though so I'm going to have to go back for repeated visits.

I don't mind.
Posted by Adaptive Radiation at 6:00 AM 2 comments:

One of my cousins is getting married in Melbourne this weekend. There will be a large group of relatives descending from Sydney and Canberra. I'm looking forward to catching up with everyone.

Nathan was puzzled why my cousin had chosen to get married on AFL grand final weekend, when flights and accommodation are at a premium.

I don't think my cousin realised when they settled on the date.
Posted by Adaptive Radiation at 4:04 PM No comments:

I saw these at a florist in North Melbourne today and had to get them. I have no idea what they are but they look weird and smell wonderful. 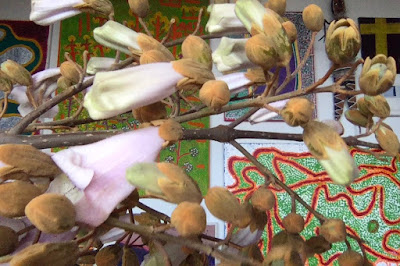 The crappiest table in the restaurant

I took a visiting Asian American Professor for Sunday brunch last week. We went to a very fancy restaurant in the city and got there super early in order to secure a table. In fact, we got there before the restaurant had even opened and there was already a small queue.

We waited our turn and a waitress asked us to follow her. Her colleague seemed perplexed and asked her where she was taking us and the colleague's response ("why?") should have been an early warning.

Sure enough, despite lots of unreserved 2 seater tables everywhere, our waitress took us up a ramp to a crappy long bench table, where we would have to sit side by side (and no doubt with others, as the restaurant filled).

We politely asked another waiter if we could sit at one of the two seater tables instead. We were quickly relocated without any fuss.

Ok, so maybe the waitress was just stupid but I couldn't help but wonder why we had been taken to the crappiest part of the restaurant when there were so many empty tables. Surely she couldn't have been that stupid?

My guest was oblivious but I did notice that the best tables were otherwise filled in order of arrival and the crappy long bench that we had been brought to was filled last.

Posted by Adaptive Radiation at 6:46 AM 2 comments:

So,  One Nation senator Malcolm Roberts chose to believe that he was not a British citizen. What a ridiculously weak argument.

This says a lot about the man, who also chooses to believe that climate change is not a reality.

It seems that Malcolm's reality is guided by beliefs rather than evidence.
Posted by Adaptive Radiation at 7:12 AM No comments:

Nathan and I both filled out our same-sex marriage surveys and have posted them back to the Australian Bureau of Statistics (ABS).

As a scientist, I see so many design flaws with the process that, whichever way the decision goes, it's legitimacy is vulnerable to being questioned.

We all know that the compulsory plebiscite was blocked by the Senate and the Government has decided to go for a non compulsory postal survey instead.

Naturally, this means that only the views of a portion of the population will be sampled because not everyone is going to return their postal survey. Gathering data on only a 'subsample' of the population is widely and legitimately used in science – provided that the design of the subsampling is scientifically sound. Herein lies my biggest issue. Those who choose to participate and return their surveys will not necessarily be representative of the population as a whole because they will be a self-selecting bunch of individuals, i.e., those who feel strongly enough about the issue to vote. If one is going to subsample a population, then one needs to randomise the sampling process. The ABS should know this. It's one of the basics of good scientific design.

The question being asked is also being confused. The 'no' campaign has been raising a bunch of questions that have very little to do with the specific question at hand, which is about whether the law should be changed to allow same sex couples to marry. Thus, if some people are answering 'no' because they don't agree with some of the other issues being raised (boys wearing dresses; safe schools program), then this potentially also calls into question the validity of some of the returned surveys.

I've only raised some of the scientific issues. There are, in fact, many problems that could affect the credibility of the postal survey, from undelivered survey forms to people filling out multiple surveys.

And that's the worry!

I'm off to Canberra today. Lots of celebration going on this weekend.

Youngest sis and brother-in-law are inviting extended family for wedding lunch. Grandma's birthday is coming up. And, of course, it's Father's Day on Sunday.

I'm also going to have to (finally) clean my fish tank, which is still at my folk's house. I have only one fish left. Since it was already an adult when I bought it, it's at least 19 years old!


Posted by Adaptive Radiation at 7:49 AM No comments: