I am back in Canberra for a few days visiting with family and friends.

The security guy who was checking my bag at Melbourne airport was making polite conversation and asked me where I was going. When I said Canberra, the guy asked "Why would you want to go there?" Poor Canberra.

I went to the Canberra Centre two days in a row. I noticed the same elderly lady sitting near the information desk eating chocolate ice cream on both days. My parents say she is always there, eating her ice cream. It must be her routine.

My routine in Canberra is to eat, eat, eat. It is unrelenting. My parents feed me from morning til night. I always gain weight.
Posted by Adaptive Radiation at 4:50 PM 2 comments: 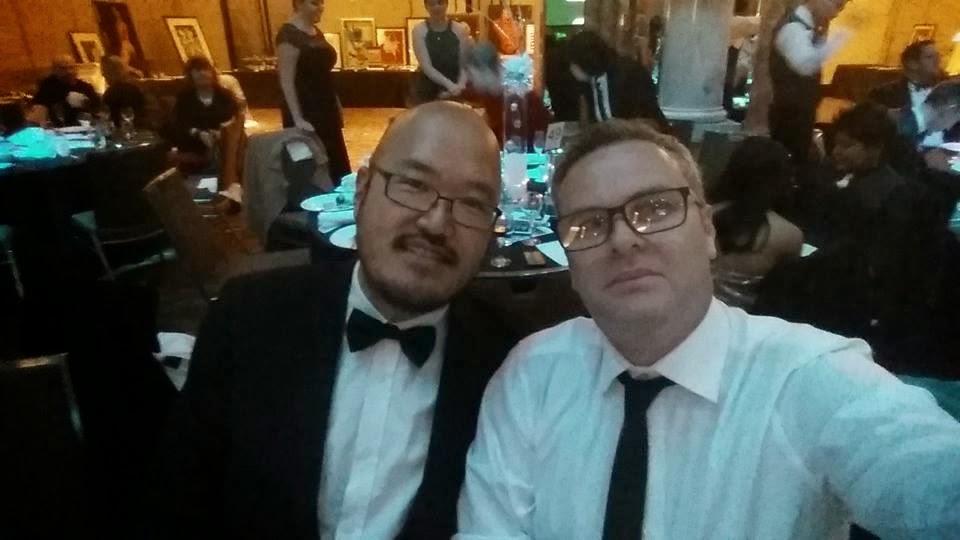 Nathan and I attended the inaugural midwinta ball last night at the Grand Hyatt. Nathan had organised tickets a while ago but forgot to tell me about it until Wednesday.

The event was black tie. We had planned to hire tuxedos but because it was too 'last minute', Nathan ended up buying a tux (which wasn't that much more expensive than the cost of hire) and I decided to just wear my black suit with a bow tie to make it look a bit more formal. I was feeling a little nervous about being under-dressed but I needn't have worried...it turns out that anything goes at a gay gala ball. One guy even wore black leather and chains (I guess technically it was still 'black tie').
Posted by Adaptive Radiation at 8:46 AM 2 comments:

Nathan and I are back in Melbourne.

The work part of my American trip (a conference in New York) went very well. One of my students even picked up a prize for his presentation. While I was attending the conference, Nathan continued his 'holiday' and squeezed in a visit to Washington DC.

We left the US on Wednesday local time. We flew with Delta from NY to LA because our original booking on Qantas was only from Melbourne to LA return – and it would have cost more than doubled the price to make changes to the ticket in order to fly out of New York with Qantas. This turned out to be a huge blessing in disguise for several reasons.

First, Delta was awesome. The flight attendants were the most friendly I have ever encountered on a US carrier (they were actually courteous). Both the food and inflight entertainment were also excellent and, to our surprise, included in the price of our ticket.

Second, not flying with Qantas from NY to LA on Wednesday meant we avoided this debacle. In fact, our flight from LA to Melbourne was half empty because we left without the New York passengers who were stranded in LA because of the delay out of New York.

Third, we had the most awesome flight attendants from LA to Melbourne. In fact, one of the flight attendants, Tarsh, was on our flight from Melbourne to LA a few weeks earlier. And because we struck up a great rapport with her the first time around, she actually remembered us and pampered us with pjs and toiletries from business class.

Now, I just need to get over the jet lag.
Posted by Adaptive Radiation at 2:53 AM 2 comments: