There nothing like a relaxing lunch at the end of a busy working week. My friend Ben is in town with his brother and dad for the rugby this evening. I suggested meeting them for lunch at the Meat and Wine Company at Southbank. The boys all went for the more modestly-sized lunch specials. I decided to order the portuguese grilled chicken. A whole chicken...for lunch. Delicious.

Over lunch, I found out that Ben will soon be heading overseas again for work. I'm not quite sure how he does it. He's spent the last decade or so working for multinationals across Asia. Long hours. High stress. Away from family and most of his friends. And yet he's managed to stay exactly the same today as the first day I met him all those years ago back at uni...a little bit goofy and extremely well grounded. Maybe it's his upbringing. Both his brother and his dad are also very nice people (and I'd imagine mum would be the same). Ben reckons this new job should be a bit better than his last. He'll be working for a European bank this time round. He reckons the culture should be a bit more laid bank compared to the American company he was working for the last time round. I wished him well.
Posted by Adaptive Radiation at 4:50 PM No comments:

I went to an auction in South Yarra on Monday night. The vendor, an artist, was clearing out his entire collection of furniture and art - an ecclectic mix of tribal artifacts, contemporary paintings and buddha statues. Most of the lots sold very well and bidding was intense.

One bidder, however, engaged in some counter intuitive bidding practice that seemed very unstrategic in my opinion. It happened twice. Both times, the auctioneer had began the bidding on a lot item at $50. No one else in the room was interested. But instead of raising his paddle and trying to get the item for $50, the bidder shouts out $75. The first time, even the auctioneer was caught by surprise and gave a wry smile. The logic didn't make any sense...instead of getting something cheaply that clearly no one else wanted, why on Earth would you offer more money?
Posted by Adaptive Radiation at 12:00 PM 2 comments:

Would the real Joey Jeremiah please stand up?

People of my generation will most probably remember coming home from school and watching the original Degrassi series, which cntred around a bunch of Canadian school kids and their lives. The series was quite forward-thinking in tackling a range of controversial topics from teen pregancy to teen suicide. ABC 3 currently is showing the latest instalment (imaginatively titled 'Degrassi: the next generation'). It features some of the original cast members (now adults of course).

One of the main characters is a guy named Joey Jeremiah who is portrayed (both in the original and current series) by Pat Mastroianni.

Here is a picture of Pat as Joey in the original series (I may or may not have had a crush on him). 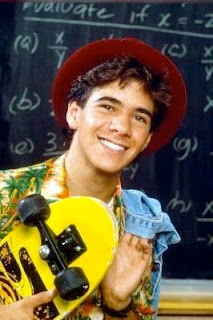 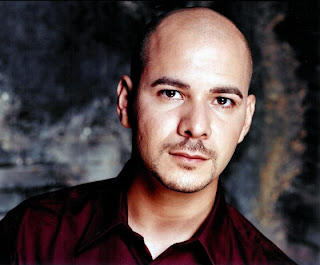 On Tuesday, the MX newspaper published a photo showing a guy holding up a picture of Joey Jeremiah. I dont have the original newspaper clipping but I did manage to do a google search for the guy's name (because obviously I have nothing better to do) and found another picture of the same guy.

The photo caption claimed that this guy played Joey Jeremiah in the series and that he was due to be launching something in Melbourne on Thursday. Clearly this guy is no Pat Mastroianni. Either the newspaper caption got it horribly wrong (which is not inconceivable) or some other dude is trying to masquerade as Joey Jeremiah. Now it's also possible that the character was portrayed by more than one actor (think Pippa from Home and Away, or James Bond) but I don't think that was the case here.

No, I think what we have here is far more sinister; a case of either bad journalism or someone trying to ride on the coat tails of a B-grade celebrity.
Posted by Adaptive Radiation at 9:52 AM 3 comments:

I'm totally over (in no particular order)...

1. hearing about retired swimmers wanting to make a comeback.
2. Shane Warne and his hair endorsements/cosmetic surgery/love affairs/latest texting scandal.
3. Eddie McGuire.
4. anything to do with St Kilda football players/managers and what they may or may not be doing with their penises.
Posted by Adaptive Radiation at 7:18 AM No comments:

My friend, Pt, visited me last week. Pt is a Latin American biologist whom I first met at a conference in Mexico in 2004. She recently started a new job in, of all places, Geelong. Pt is sassy and she is into salsa and she reckons Geelong is a shit hole.

Pt is also single and she wants to fall in love. Unfortunately, the whole dating scene in Geelong, according to Pt, is non-existent. She's tried to be proactive. One of the first things Pt did when she arrived in Geelong was sign up to a local chess club in the hopes of meeting a nice single man. Plenty of men at the chess club. Pity they were all over 60. She also tried coming to Melbourne for salsa but the commute was not ideal. In the end, she decided to give internet dating a go and signed up for RSVP.

Not surprisingly, being a sassy latina, Pt has been getting plenty of attention from the guys. Fresh meat. But the dates haven't been going so well. It's the same old story. She starts chatting to a guy. They hit it off and end up emailing and texting each other incessantly. And then...they meet and everything goes to shit.

The first guy she was 'seeing' sounded like a nightmare. They spoke on the phone every day for a whole month. They go on a first date. It goes well (although the guy was at least six years older and a whole lot less attractive than what his profile picture suggested). Still, Pt is not superficial. She decides to go with the flow so they go on a second date. They end up at her place, kiss a little, and just as things were starting to get a little cosy, he tells her he has herpes. Great. Then there was the guy who happen to not mention that he has a child on his RSVP profile. It wouldn't have mattered to Pt but she thought he was being dishonest.

I'll be seeing Pt this Sunday. She's coming to town for yet another date. I'm keen to see how this one will pan out.
Posted by Adaptive Radiation at 4:18 PM 5 comments:

Nathan and I took advantage of the car we rented for the wedding yesterday to go out into the 'burbs' this morning for a stroll. We went to Gardenworld out in Keysborough.

There were lots of weird plants for sale including this orchid which has a most unusual flower. 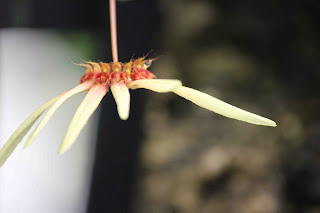 Me checking out the carnivorous plants. 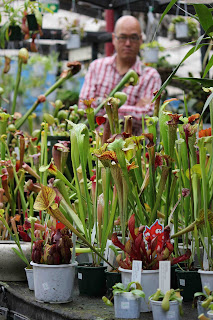 A beautiful english oak transformed into a bonsai. 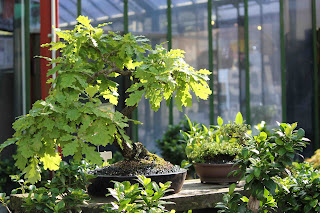 A corella. Nathan managed to have a lengthy conversation with the bird. 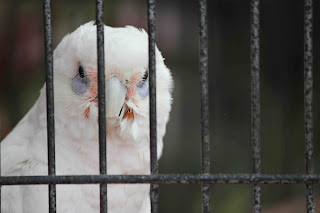 We stopped into the South Melbourne markets on the way back into the city. Nathan had never been before and I wanted to introduce him to the famous dim sims. It tasted a bit like a sausage roll. 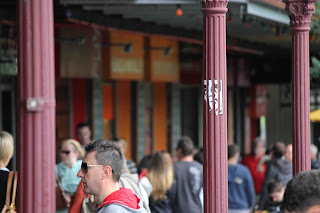 Went to a wedding last night. The bride was one of Nathan's relatives. The groom is a born again Christian. It's the groom's choice really and he did seem like a genuinely nice bloke. So kudos to him for turning his life around (whatever the means). However, it did make for a very interesting reception....

First up, I've never heard the word 'Lord' mentioned so many times in one sitting...ever (and I went to a catholic school).

Second, I've never heard someone declare that they will "love their wife as much as they love God", which I hope, for the wife's sake, is a God-damned lot.

Third, I never ever would've imagined hearing the words 'fornication', 'drug addict' and 'alcoholic' uttered in a groom's speech.... Luckily its all water under the bridge now but it was quite a candid admission in front of a room full of guests (most of whom were either squirming uncomfortably in their seats or giggling uncontrollably).

The best, however, was saved for last...the best man. He too was a born again Christian. A big, burly, bald-headed man. And 'yes', he was formerly addicted to drugs and sex. His speech was like an excerpt straight out of one of those Christian TV shows. Animated, God-praising kinda stuff. Delivered with a lot of hand gesturing, bravado and an American-accent. I think the bride was pissed. She got up after the speech and stormed outside with bridesmaids in tow.
Posted by Adaptive Radiation at 8:05 AM 1 comment: 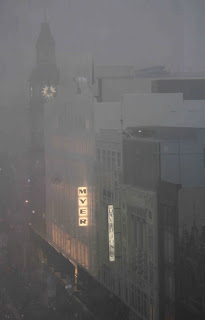 Time for a new laptop? 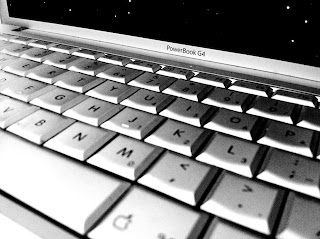 I think it might be time to get myself a new laptop. I've had my Powerbook G4 since the end of 2003. It has travelled with me to the US and Europe when I was living overseas and has gone with me to conferences the world over. I've used it to give lectures at uni and I've dragged it to all kinds of remote places for research. It has brought me as much attention from strangers as someone with a cute baby or puppy. My mac was with me when I was still in the closet and it was there when I finally came out. The G4 has been a very reliable machine. Constant. Stable. But it's now getting old. I've taken it for granted assuming that it would last forever - but it turns out I've simply had a very good run. Yesterday it starting making a whizzing sound. And then it died. I managed to revive it but the experience has brought me back to reality.... I need to make sure I back everything up and then I need to go shopping for a new Mac. Good bye trusted friend.
Posted by Adaptive Radiation at 8:42 AM 3 comments: