About 2 years ago, I got a friend request on facebook from a guy I didn't know. This happens from time to time (mostly undergraduate students who want to be my friend...a definite no no). But this guy was different – even though I had no idea who he was, we had several friends in common (plus, he looks like Hugh Jackman). What confused me most was that our mutual friends bridge several of my existing friendship circles. Who the hell was this guy? I decided I would ignore his friend request.

Fast forward to Saturday morning. I am on my way back to Canberra (from Melbourne via Sydney) to deal with the leaky fish tank. I am sitting in the aisle seat in the emergency row. Another passenger needs to get to the window seat and as he does, looks at me with surprise and calls out to me by name. Turns out it was the facebook guy (I still didn't know who the hell he was).

Anyhow, we start chatting and it turns out that he had just arrived back to Oz from Europe and was on his way back to Canberra for a week. So let's look at the series of coincidental events that led to this unusual meeting....

ME:
1. Aquarium in Canberra springs a leak. Decided at the last minute to go back to fix it.
2. Only available flight using frequent flyer points has me flying to Canberra via Sydney.
3. Asked for (and was granted) exit row seat (seat 11D).

I obviously didn't end up as a pilot. But, as a biologist, I nevertheless get to do a fair bit of travelling: travelling to conferences; travelling to field sites; travelling for work shops. I've been doing so much travelling of late that, quite frankly, I think I'm over it.

So...just when I thought I would be done with travelling for a while, it turns out I'll be flying out of Melbourne over the weekend.... to Canberra. My aquarium at my folk's place has sprung a leak. Dad has managed to construct a device to channel the drips back into the filter system but I'm worried the drips might turn into a torrent if I don't do anything about it.

Fortunately, with all the travelling I've been doing of late, I've earned enough frequent flyer points to go home (minus the $100 credit card payment for 'charges and taxes').

The flights are not great though (they never are when you book on frequent flyer points three days before the day of departure). I'll be flying to Canberra via Sydney! Yep. I'll be flying over Canberra on my plane towards Sydney and then, after an hour at Sydney airport, I'll be zipping back south on another plane to Canberra. I'll get in at 9.15am. And less than 24 hours later, I'll be on my way back to Melbourne – a direct flight this time (I don't think I can do the CBR-SYD-MEL thing on a Sunday).

On the plus side, all the recent travelling has finally earned me enough status points to elevate me to Silver membership on my frequent flyers so I'll get to enjoy the Qantas lounge.
Posted by Adaptive Radiation at 9:33 PM 2 comments:

I'm back in Oz. I flew from Helsinki to Melbourne via Singapore. Changi is impressive. The last time I was there, it was still undergoing refurbishments. I went for a walk to see the butterfly house. I then sat myself in front of a huge TV monitor to kill time...it was showing Air Crash Investigation (not sure if it was really such a great program to be showing at an airport).

Got back to Melbourne early on Thursday morning. Pretty much went straight to sleep, woke up for lunch and dinner, and then slept straight through 'til 5am. The unprecedented bout of sleep seemed to have killed the jet lag. Went back to work on Friday and didn't feel tired at all.
Posted by Adaptive Radiation at 10:56 PM No comments:

Caught the train from Turku to Tampere yesterday to visit my friend's parents. This is the beautiful view from their house... 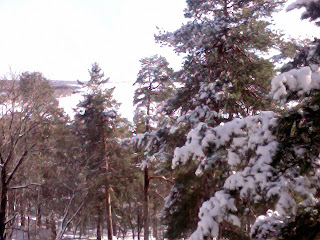 And this is the beautiful rhubarb pie we ate... 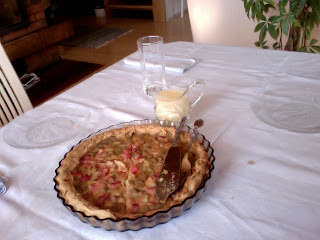 I just had a sauna in my friend's apartment. Yes, my friend has a sauna in his one bedroom apartment (that's how obsessed Finns are about their saunas). Anyhow, I'm not complaining. It's a great way to start the day. Very relaxing. I'm now ready to go out and face the snow.
Posted by Adaptive Radiation at 8:06 PM 2 comments:

Anyhow, I didn't spend much time in Helsinki. I got to the city centre and immediately boarded a train to Turku. Tomorrow, I'll be going to Tampere. All up, I am only spending four days in Fniland and it looks like I will be spending it in three different cities. Should be fun.
Posted by Adaptive Radiation at 6:38 PM No comments: 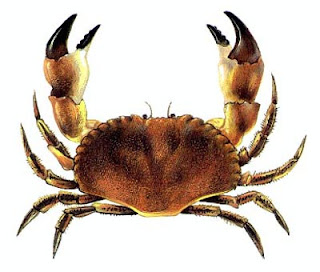 The swedes really know how to put on a feast. To celebrate the final night of the student workshop, we had a traditional 'festmiddag' comprising mountains of shrimp, crabs and scampi prawns accompanied by creamy garlic dipping sauce, fresh bread, and cheese. I don't think I have ever peeled or eaten so many crustaceans in my entire life.
Posted by Adaptive Radiation at 6:05 AM 1 comment:

This is the view from my room this morning. 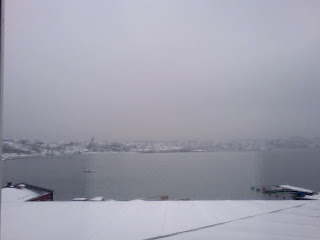 Everything was covered with a fine powder of snow.

As you can see from the next image, by late afternoon, a lot of it has melted away. 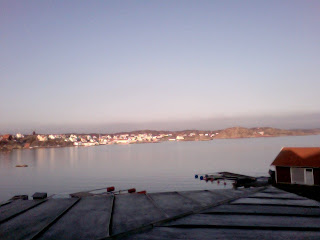 Yep. It's snowing outside. This is the view from the room where I am staying. 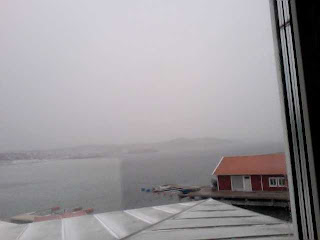 We earlier went on a long walk with the students to a neighbouring village. Once we got to the village, it was straight onto a boat for a cruise around the fjord. There were hot beverages at hand, along with delicious cinnamon rolls for afternoon tea.

This graduate workshop is feeling more like a nice little vacation than work. Oh....I did have to deliver a 40 minute seminar to the students this morning (I don't want to make it sound like a complete junket).
Posted by Adaptive Radiation at 3:08 AM 2 comments: 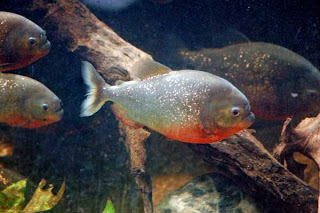 I spent Sunday visiting a bunch of museums around Gothenburg.

First up was the Universeum, a giant indoor rainforest science centre replete with small monkeys, poison arrowfrogs, parrots and a pool teeming with red bellied piranhas (hmmm...I wonder if monkeys or small children ever accidentally fall in?). More amusing was the anaconda display, separated by a pane of glass from the kids indoor play area....I reckon it must be torture for the snake.

After my Amazonian encounter, I decided to head over to the art museum for a bit of culture (they had some very nice paintings by Picasso) followed by a visit to the natural history museum to check out the infamous giant stuffed whale. Visitors used to be able to go inside the whale – apparently it was a popular rendezvous point for amorous young couples. I'm not sure why because it smells kinda bad (in a nasty, chemically, carcinogenic kinda way).

After an hour looking at stuffed animals, I decided I needed to go to the botanical gardens to look at plants (yes, I am such a science geek). The Gothenburg botanic gardens has quite an impressive collection, including a glasshouse planted with native Australian plants, and another full of tropical orchids and insect-eating plants.

Fish, art and exotic plants...a near perfect day for me.
Posted by Adaptive Radiation at 3:06 PM 1 comment:

The apartment photo shoot was published in The Sun Herald and The Sunday Age while I was away... 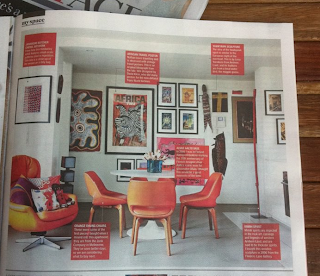 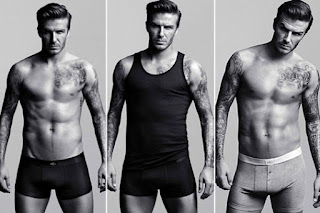 It's bang on midnight here in Gothenburg and I have just woken up (and I know I won't be getting back to sleep again anytime soon). Ahh..,the joys of air travel.

I checked the status of my 'lost' bag and it seems that it has now arrived at the airport here in Gothenburg so hopefully I will receive it sometime today (which would be a huge relief seeing as I'm suppose to be travelling first thing Monday morning to a research station for a workshop).

This means, of course, that I won't be needing to go to the local H&M anymore to but a new wardrobe. The swedish clothing giant has just done a new collection of underwear featuring the sporting megastar David Beckham. Check out the pretty pictures here. Alas, I might go in for a browse anyway (no harm window shopping, right?)

I'm looking forward to exploring the city later this morning (i.e. when the sun come out). The temperature yesterday reminds me of Canberra in the winter...cold, crisp and sunny. From what I've seen so far, Gothenburg is a very beautiful city, with lots of hills and parks. There are trams here too....very pretty light-blue ones. I don't do holiday snaps but here is a photo I found on the web for Andrew: 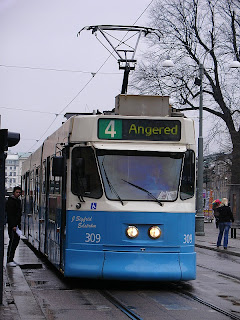 I already had my scandinavian shrimp sandwich after arriving in the city yesterday. Today, I think I'll try to get hold of some hot smoked salmon.
Posted by Adaptive Radiation at 10:00 AM 2 comments:

I finally arrived in Gothenburg. The flight over was a nightmare. The plane was delayed almost 3 hours out of Melbourne due to a mechanical issue (the A380 seems to have a lot of those).

This meant I missed my original connection from Heathrow to Gothenburg. I was put on an alternative flight – which I nearly missed because the security checks at Heathrow take so bloody long.

And when I arrived at Gothenburg, I waited at the carousel only to find that my luggage didn't make it onto the flight (surprise, surprise). Now, I'm feeling just a wee bit anxious that my bag (and all my clothes) is lost somewhere in the Heathrow luggage system, never to be seen again.

I'm not looking forward to wearing the same pair of undies the whole week.

Fortunately, the guy at the lost baggage counter felt sorry for me and gave me an overnight toiletries bag so I can at least have a shower.
Posted by Adaptive Radiation at 1:55 AM 2 comments: