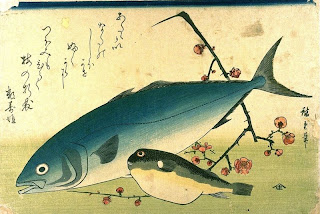 I read on The Age website last night about a recent spike in people getting poisoned after eating fugu (japanese puffer fish). Apparently a dodgy restaurant was serving up the delicacy without preparing it properly. Made me think back to the time our family went to visit my sister in Japan who was working there at the time. We went to a market place and ordered fugu sashimi from a street vendor. Everyone was a bit reticent to try it but we survived the experience (frankly, I thought it was a little overrated...quite tasteless). We subsequently got to sample it a second time in a restaurant (deep fried). Nothing. No tingling of the lips. No heart palpatations. No seizures. I though the whole 'toxic thing' was blown out of proportion; an exaggeration. We even saw fugu for sale in a supermarket in Japan. Now surely, if it takes years of training to prepare, they couldn't possibly be offering it as standard supermarket fare (I imagined meek japanese housewives expertly carving away the poisonous organs before serving fugu to their families). But last night, I read a somewhat unsettling statistic ... every year, 3 people, on average, still die from eating fugu. Sure, it's not a huge number (more people die from alcohol-related incidents) but it does make you wonder.

In case anyone is curious, this is the proper way to prepare it...

Posted by Adaptive Radiation at 9:08 AM 3 comments:

It was not the most spectacular Australia Day/Chinese New Year for me but it did end reasonably well. I spent most of yesterday morning working away on my grant proposal. By the afternoon, I had had enough and caught the tram out to meet Nate. We ended up going to one of his former work colleague's place for dinner. The colleague is originally from the Phillipines. The husband was hit by a car many years ago and suffered a stroke. Wife managed to bring up the kids who were all fantastically warm and chatty. I ended up eating way too much and got given a bunch more food to take home. Will be browsing on leftovers tonight!
Posted by Adaptive Radiation at 6:16 PM No comments:

Saving up for a play station

Last night, Nate and I took his sister and his niece to Crown. Niece wanted to go to the Galactic Circus which is basically a giant amusement park with games for kids to play. Prizes depend on the accumulation of tokens won whilst playing. Niece wants a play station. After winning 1000 tokens she still has about 59000 to go.

We went to see the movies afterwards. Saw "Bride Wars". Two words: chick flick. Still, it was quite entertaining and I managed to enjoy my evening despite work craziness niggling on my mind.
Posted by Adaptive Radiation at 4:28 PM No comments:

The cake was 'patched up' with white icing and a liberal sprinkling of shredded coconut. A strategically placed strawberry completed the transformation. Unfortunately the cake broke into two pieces but parents of the baby seem pleased by the gesture and it looks nowhere near as bad as when Nate took delivery of it on Friday morning. Disaster averted.

I attended the christening this morning. I was expecting the baby to scream her head off when splashed with holy water but this was not to be. She was remarkably well behaved.
Posted by Adaptive Radiation at 4:22 PM No comments:

Nate ordered a christening cake for his cousin's baby from the people that supply cakes for the bistro where he works. I came home yesterday and saw it sitting in the fridge. I burst into laughter. Nate almost bursts into tears.

The cake looked awful. Cut into the shape of a cruxifix, it was pasted with butter icing so thin you could actually see the parts where the cake had been joined together. On top of the cruxifix, scribbled with a line of chocolate, was the word 'baptism'. Nate evidently rang up the cake shop and swore at the owner and accused oompa-loompas of having made the cake.

We are going to try and 'salvage' the cake before sunday's christening. Could turn into an even bigger disaster. Stay tuned....
Posted by Adaptive Radiation at 7:40 AM 1 comment:

The trading up hypothesis 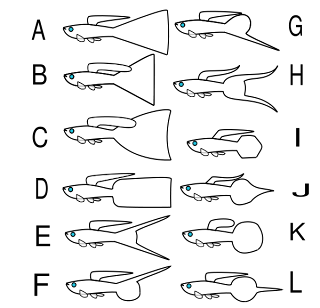 My friend is going through relationship uncertainty at the moment. Actually, it's not her. It's her boyfriend. He doesn't seem to know what he wants and is questioning the relationship. Sadly for my friend, this is the second time it's happened (the last one brought an 8 year relationship to an end). I don't quite understand it. She is one of the nicest people you can possibly meet. Even her ex says so (the one who ended the 8 year relationship). He said to me recently "You are nice but T is REALLY nice". Yeah? Then why did you dump her you idiot? Perhaps she is too nice. Can someone be too nice?

The whole thing about questioning the relationship seems to stem from an unrealistic obsession with finding THE ONE. Some people, of course, convince themselves that they have found such a person...and then start to question it when someone BETTER comes along. People study this phenomenon in animals. It's true. They've even given it a name. It's called the trading up hypothesis. I'd like to think that we are smarter in the way we view potential mating partners compared to, say, a guppy or a cricket but maybe, at the end of the day, we are all the same.
Posted by Adaptive Radiation at 4:19 PM 1 comment:

Raw comedy was actually very good. Nate's cousin wasn't too bad (but that didn't stop me from feeling nervous for him the entire routine). Some of the other people were truly exceptional. I laughed so hard that my eyes started to water (that almost never happens to me). I was, however, a bit disappointed by a couple of hecklers who were knocking one of the guys for telling a gay joke. One girl shouted out "gay jokes aren't funny". She most certainly wasn't speaking for me.
Posted by Adaptive Radiation at 5:47 PM 1 comment:

Been flat out all week again. Apart from having to work on my stupid grant, I've also been running activities with a bunch of high school students at our uni. Am glad it's the weekend.

Last night, Nate and I headed off to a pub called The Local. We were meeting some friends there for drinks, one of whom was celebrating his birthday. We walked into the pub and noticed that none of our friends were there. The immediate thought was panic. Hmmm...maybe his email said 'HIS' local rather than 'The Local'. A quick call and the realisation that the pub had an upstairs section quickly took care of the initial self-doubt. Had a really good time. Met a girl from Canberra who is friends with somebody that I know etc etc (same old story...such a Canberra thing).

Afterwards, Nate, his cousin and I headed off to another birthday thing at PJ Obrien's on Southbank. The music was shit so I stayed for only a few minutes before coming home to bed. Anyhow...Nate returns home sometime later, stumbles into bed and apologises profusely for having met a couple of Australian idol contestants. His speech was a little slurred but evidently he was on the stage, conversations were had, 'love yous' were exchanged, and pictures were taken. I will interogate Nathan later when he wakes up and ask for evidence.

Heading off to see Nate's other cousin do stand up comedy later. I do hope he is funny.
Posted by Adaptive Radiation at 8:02 AM No comments: 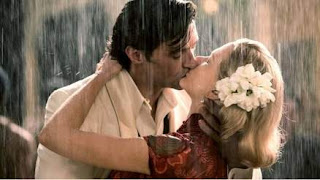 Finally went and saw Australia last night. I enjoyed it immensely for the entertainment value but I have a complaint. I always feel a bit uneasy about the way non-indigenous Australia tries to portray indigenous issues on the public stage. There is a tendency, I think, to overplay stereotypes (e.g. bearded aboriginal standing on one leg with spear in hand) and/or to depict injustices of the past in a way that is over-the-top (over-compensation?), condescending and superficial all at the same time. The stolen generations is a theme that runs deep in this movie. It's a pity that the treatment of it only scratches at the surface.
Posted by Adaptive Radiation at 8:04 AM 1 comment:

Nathan borrowed his mum's dictionary of medical terminology. He works in a hospital bistro but is thinking of moving into medical records. I come home yesterday afternoon to find Nathan lying on the bed flipping through the dictionary. We look up 'smegma' and 'perenium', giggled, and then got ourselves ready for the dinner party.
Posted by Adaptive Radiation at 9:00 AM 6 comments:

What a week! It's been incredibly hectic and stressful at work (with no signs of letting up for at least a month). I'm soooo glad it's Friday. Tonight, Nate and I are heading off for dinner at a friend's house. I'm not much of a sweet tooth, but to counter the sourness of the last few days, I reckon I'm well justified picking up some of these along the way to bring to the dinner party... 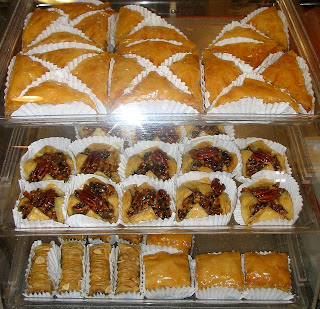 Posted by Adaptive Radiation at 9:15 AM No comments:

In a momentary lapse of stupidity, I was quickly reminded that Ikea on a Sunday afternoon is not for the faint-hearted. The escalator up to the entrance was crammed with eager shoppers (mostly in the form of young families with cumbersome prams and/or screaming kids). I should have turned around. I didn't. Instead, I join the other foolish idiots and head upstairs. Shuffle, shuffle, shuffle. I entertain the idea of ordering swedish meatballs at the restautrant even though I had already had lunch (I blame Muzbot). I resist temptation and mozie downstairs. Shuffle, shuffle, shuffle. I find my tealights and head to the check out.
Posted by Adaptive Radiation at 5:11 PM 7 comments:

Hmmm...how should I spend the last day of my holidays?

Well...maybe I shouldn't have begun by checking my email and clicking open mail that is obviously work-related. Following that, I should certainly not have spent the next three hours working.

Plans for rest of the day...

1. Shut off computer
2. Brush teeth and take shower
3. Have some lunch
4. Get out of apartment. Take first tram that comes along the corner of Spencer and Collins. If it is the 112 tram, I shall go to Brunswick Street and do some window-shopping and people-gazing. If it's the 109 tram, I will go to Ikea and buy tea lights.
5. Heck...scratch option 4. Walk to Brunswick Street to work off Christmas fat, go window-shopping and people-gazing, AND then catch a tram to Ikea to buy tealights.
Posted by Adaptive Radiation at 10:48 AM 2 comments:

Just got back from visiting Nate's dad and sister in the country. We caught the train out to Yarragon, a quaint little village situated along the Princes Highway. We had lunch at Nate's dad's place before heading out to the family farm where Nate's sister lives. I played singstar with Nate's 11 year old niece for 3 hours (I kicked her ass).
Posted by Adaptive Radiation at 1:46 PM 2 comments: