The guy who held up the train

A train pulls up at platform 7 at Flinders Street Station this morning. All the passengers get off the train. The screen on the platform monitor says that the train is not taking any passengers. I stand on the platform waiting for the next train that is suppose to take me into work. I see a guy running along the length of the platform, gets to the last carriage and tried to get in. He looks desperate. He then tries to flag down a cleaner to help him get into the carriage. No luck. He then decides to run to the front end of the train and manages to get the train driver out. They walk all the way to the back of the train. The driver opens the carriage door. The guy goes in and emerges with a plastic bag....containing his fu&*ing lunch! He held up the train and caused delays for his lunch! Because of the idiot, our train couldn't get to the platform. We all had to go to another one and I ended up getting to work 15 mins late. Well done Mr. lunch man. Hope you enjoy your sandwhich.
Posted by Adaptive Radiation at 8:37 AM 3 comments:

Im hoping it's just a pimple

I'm suppose to be going to an animal research facility on Monday. It's been lined up for weeks now; a very important meeting to discuss use of the facility for my student's research. The monkeys housed at the facility are highly susceptible to cold sores. Apparently, it can be fatal for them. I've never had a cold sore on my lip before so I don't know what one is suppose to look like. But you can imagine my horror this morning when I looked into the bathroom mirror and noticed a small, red bump on my upper lip. Am I being a hypochondriac? Could this really be happening? Surely it's just a pimple? I'm not taking any risks. Straight to the pharmacy for ointment (which has been plastered liberally over the offending bump). I've also got myself a couple of lemons for topical application (apparently an effective home remedy). Crap. Crap. Crap.
Posted by Adaptive Radiation at 4:04 PM 3 comments:

A young guy is sitting on the train eating yakitori chicken. The train pulls up at Southern Cross Station. I get up to leave. The young guy stops me and asks "Excuse me. Can you put my rubbish in the bin for me?" I say "No". WTF?
Posted by Adaptive Radiation at 8:28 AM 3 comments:

Out with the old and in with the new

The city of Melbourne has a new logo. This is the old one which was designed in the 90s. According to our Lord Mayor, it is 'daggy'.

This is the new logo, all $240,000 worth (that's how much it cost to carry out preliminary research on the new brand and the cost of the actual design).

What do you think?
Posted by Adaptive Radiation at 3:29 PM 5 comments:

Melbourne is abuzz with all-things design at the moment as part of the 2009 'State of Design' Festival. Nathan and I were hoping to go on some of the open house tours of historic buildings around the city on Sunday but the queues were unbelievable. Instead, we went to a design market in a derelict building near Docklands, followed by a self-guided tour of some interesting (and easily overlooked) graphical and architectural details in some of the laneways and building facades in the CBD (based on info contained in the festival Guide).
Posted by Adaptive Radiation at 3:13 PM No comments:

I found a VCE visual art diary on the train yesterday belonging to a year 11 student. Unfortunately, apart from her name (which was quite a common one) and her artistic talent, I knew nothing else about the owner. I decided to take the visual diary to the office to do some detective work to see if I could return it to the rightful owner.

I tried facebook first. There were 13 people with the same name. Two were from Melbourne. Unfortunately they were both older ladies and couldn't possibly be the right person. An attempt to search for the owner on myspace was equally disappointing.

I then turned to google. Two school girls matched the name and city. I called the school of the first girl. Yes there was a girl by that name at the school but she was not in year 11. I then tried the school of the next girl, someone who had two years ago won some accolaide for dancing. Bingo! It was her! Am dropping the diary off to lost property tonight and she is going to pick it up tomorrow.
Posted by Adaptive Radiation at 1:24 PM 7 comments:

The Canberra Times on the weekend published yet another article about my former school, this time with accusations that it might have harboured a paedophile ring. I've written before about one of the teachers at the school being convicted for indecent assault but looks like the predatory activities may have been much broader in reach. I was, of course, completely oblivious to it all but it does make me think back on incidents which, although innocent at the time, might have had more sinister undertones (e.g. on year 6 camp when we had to strip down and have quick showers in a makeshift facility in the middle of the bush with the brothers watching us the whole time.)
Posted by Adaptive Radiation at 12:49 PM No comments:

Guy to friend: This is Target. It's like Myers but for delinquents.
Posted by Adaptive Radiation at 8:51 AM No comments:

Pho, bimbo and the iraqi

Went to Footscray yesterday morning with Nate to meet a couple of friends. Just three gays and a lesbian out for brunch. One of the friends (here after referred to as 'goldfish guy) arrived at the meeting place carrying a bag of goldfish which we named once we got to the restaurant...Trinny, Suzanna, Steve and Michael Jackson (the one with the white face).

Anyhoo...brunch in Footscray was, of course, pho (vietnamese noodle soup). Nate was most disappointed. Only a week earlier, he had vowed never to eat vietnamese food again (he is definitely not a fan). Fortunately, it was out of my hands because the friends had decided the venue well in advance. So...I ordered a large bowl of special beef combination pho (which, in hindsight, was a tad ambitious), while Nate settled for spring rolls with vermicelli. 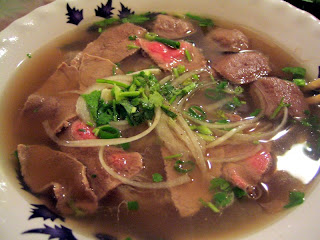 After some yummy fresh-out-of-the-oven custard tarts from a nearby bakery and a convoluted trip in search of coffee (we ended up in a huge mall), we got caught up in footy traffic heading back into the city. We abandoned Nathan somewhere on Swan street (he had to go to work) and decided to take a few back roads to get away from all the cars. We made a detour to the goldfish guy's house so he could drop off one of his fish (the other three were apparently destined for a newly constructed pond) before making our way to Brunswick street to meet a friend of the lesbian at Bimbo. 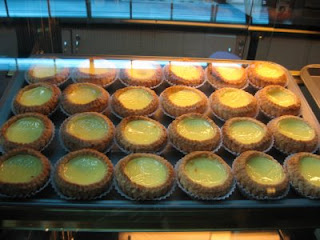 Bimbo...the bar with the giant cupie doll perched on the facade of the building. I know the bar is a bit of an institution, but oh what a dump. It smelt like BO and the interior reminded me of that psychopath's house in Silence of the Lambs (the only thing missing were the moths). The company was most interesting though. The lesbian friend's friend is an Iraqi Assyrian orthodox christian. He is a very handsome guy with a very international look (he could easily pass himself off as south american, continental european, indian or even aboriginal). Most fascinating of all (to me, at least)...he has a pet scorpion. 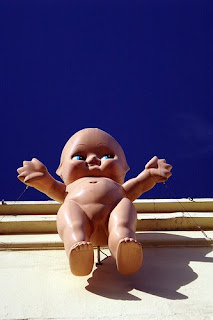 After drinkies, we dropped goldfish guy at the train station (with his three remaining goldfish) and, somehow, the rest of us (lesbian, iraqi and me) ended up back in Footscray for dinner before coming back to my apt for tea. Definitely NOT a conventional Saturday for me.
Posted by Adaptive Radiation at 7:22 AM No comments: 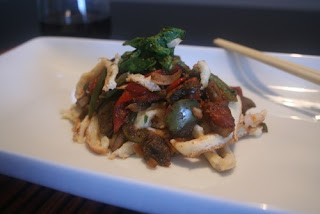 I think this is a great idea.
Posted by Adaptive Radiation at 1:04 PM No comments:

Everybody seems to be doing it now...Christmas in July. I decided to hop on the bandwagon and bought a turkey yesterday. It was a last minute decision when I was sitting on the train on the way back into the city after work ("Hmmm...I think I will roast a turkey for dinner"). This was at 7pm. So...instead of heading straight home, I took a detour to the local Safeway (where I last saw whole turkeys) and bought one on special (today would have been it's use by date). Ok. Back home, I realised that the turkey was going to take two hours to cook. Normally I am a bit of risk taker when it comes to the consumption of poultry but the imminent use-by date on the packaging suggested I should actually take heed of the cooking instructions and cook the hell out of the beast (just in case). I am a terribly impatient cook so while I was waiting for the oven to do its thing, I ended up eating all the side dishes (i.e. vegetables). Eventually, at 9.30pm, I sliced myself a generous portion (it was only a baby turkey) and celebrated Christmas in July while Nate was still at work.
Posted by Adaptive Radiation at 10:26 AM 3 comments:

I had such an extraordinarily ordinary weekend. There were no visitors to chaperone, no work to catch up on and nothing that required urgent attention. I cancelled all my social engagements (on the grounds tha I was starting to get a sore throat). I spent Saturday shopping for groceries and contemplating the week's menu. I went for a stroll down Chapel Street, then headed off to Brunswick street to get some flowers for home. I ended up buying kale (a purple ornamental cabbage). Got home, plonked it into the vase and relaxed.

On Sunday, I went to the NGV International on a whim and took home a book on Oceanic art. I decided to have fish for lunch so I hopped onto a city circle tram in the late morning, made my way up to the fishmonger, bought myself a swordfish steak, took the tram down to Elizabeth street just in time to intercept the same city circle tram on Flinders street, which I caught back to the apartment. After lunch, I started making dinner (as you do)...a nice beef vindaloo using beef ribs that required gentle, slow cooking. I cleaned the house, drank chai all afternoon in my pjs and settled onto the couch to read my new book. I feel completely refreshed.
Posted by Adaptive Radiation at 11:21 AM 4 comments: