...of wallowing in excessive feast for a week in Canberra is a 4 kg weight gain! How is that even possible?
Posted by Adaptive Radiation at 10:40 AM 2 comments:

Hope santa was good to everybody!

Love to all,
Ad Rad
Posted by Adaptive Radiation at 11:22 AM 1 comment:

Cleaning out the glasshouse

I decided to clean up the glasshouse at my parent's place today which had started to look like a scene out of Jurassic Park...It had become quite overgrown (not by weeds but, strangely, by ferns).

Moving the plants around to get at the unwanted ferns was not as easy as I thought...one of the plants, a whopper of a Sydney rock orchid, must have weighed more than a hundred kilos (the fact that it was sitting inside a heavy terracotta pot didn't help with the lifting).

After I was done removing as much of the unwanted ferns as I possibly could, I decided that some of the orchids needed repotting.

Repotting an orchid - as anyone with the experience would attest - is not for the faint-hearted. Apart from the ocassional centipede, slug and spider (the latter seems to freak me out in ways like no other creature I have ever encountered as a biologist), repotting a (large) orchid is, to put it simply, bloody hard work (I now know why Don Burke recommends an axe). My three hours of potting felt like an intense work out at the gym....there was a lot of lifting, grunting, arm flexing, profuse sweating and tears (I very nearly threw up). By the end of it all, I was absolutely exhausted.
Posted by Adaptive Radiation at 5:23 PM No comments:

How ironic. All this year, I have been working to lower my cholesterol and improve my health. I've watched my diet and, in the process, even managed to lose some weight. And just when the doctor gave me a clean bill of health (yep, cholesterol levels are all back to normal), I started getting a pain in my left foot that dad reckons is gout. I also noticed that I have two white hairs on my chin. I think I am aging.
Posted by Adaptive Radiation at 12:19 PM 3 comments:

I have no doubt my friend Pete is straight. Still, every now and then, he'd make a passing comment or send me a few photos that makes me wonder otherwise.

As most people are aware, the news these last few days have been dominated by the naked photos of the St Kilda players on facebook. Am I curious? No, not really. Well, maybe just a little (but certainly not enough to go trawling for the images on the www).

So... imagine my surprise when I receive an email from Pete today, not only with a news clipping of the whole sordid saga but also accompanying pictures (as an aside, nothing that impressive). But really...what straight guy would be sending his mates photos of naked men?
Posted by Adaptive Radiation at 5:25 PM 5 comments:

Me thinks I should have been a banker...

I've got a pretty good view of the ANZ building from my apartment balcony but I had no idea the interior looked this amazing... 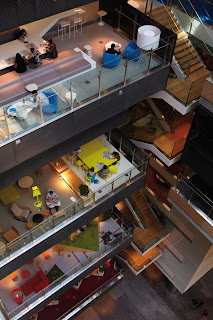 I need to revamp my office space. The carpets are old and stained and I was recently told that an academic had died in the office in the early 80s (I'm hoping that the death and the carpet stains are unrelated).
Posted by Adaptive Radiation at 6:19 PM 6 comments:

I'm back in Canberra for the week visiting my folks. I've left poor Nathan behind (he's decided that he'll work through Christmas this year to earn some extra pocket money).

After the debacle flying with Tiger Airways the last time I visited Canberra, I thought I'd play it safe(r) and flew Qantas using my frequent flyer points. The flight was on a Dash-8 (i.e. little propellar plane), which I don't mind since there seems to be a little more leg room than on a boeing or an airbus. It was a pretty bumpy flight though, rough weather pretty much along the entire length of south-eastern Australia.

My youngest sis met me at the airport and drove us to lunch in the city. My parents have become quite obsessed with the senior's lunch and meat raffle at the Labour club in civic (one of the perks of getting old I guess). By the time we arrived, the food was already on the table (grilled barramundi with chips and salad). Ten minutes later, dad had all the free raffle tix lined up on the table (his, mum's and grandma's). An hour later, we left with a christmas ham AND a meat tray (dad is trying to figure out what asian twist he might be able to put on the corned beef).
Posted by Adaptive Radiation at 4:49 PM 3 comments: 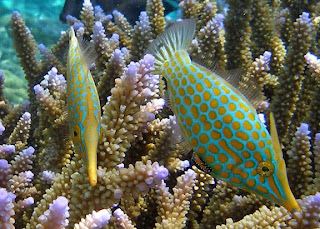 Apologies for the lack of blogging activity in the past few days. I've been on a field course on a tropical island on the Great Barrier Reef (yes, life can be tough some times).

I spent a little over a week supervising undergraduate students as they went about collecting data on corals and other sea creatures around the island.

We got to do plenty of snorkelling and I saw lots of sharks, stingrays, brightly-coloured reef fishes, giant clams and turtles (both in and out of the water). There was even a gay wedding proposal...The boyfriend of one of our PhD students came up for the weekend and proposed on the beach late on Sunday night. The rest of us found out on Monday morning and we were all extremely excited (Tony, the PhD student, is one of the nicest blokes you could ever meet and he was soooo happy). Evidently, being the clumsy person that he is, Tony managed to drop the ring in the sea and spent a good 40 minutes searching for it with his boyfriend in the surf before finding it again. Phew.
Posted by Adaptive Radiation at 6:01 PM 3 comments:

I'm not really a christmas kinda guy. Nathan, on the otherhand, LOVES Christmas. Above all else, he loves decorating the christmas tree. Every year he has a different theme in mind. And for the past two months, every time we walked past a christmas tree in a department store, he'd be talking about how fantastic our tree will look this year.

So...imagine my surprise when I came home on Wednesday to find the tree up but with not a single decoration. No Christmas bauble. No tinsel. No fairy lights. Nothing but a hastly assembled plastic tree. I figure he'll put together something soon but several days later, the plastic branches still lay bare.

It took me a while but I finally figured why Nate was less excited about getting the decorations up for the home christmas tree this year...he was preoccupied with putting together the office tree (see below). I'm shuddering to think what he plans for the home tree this year. 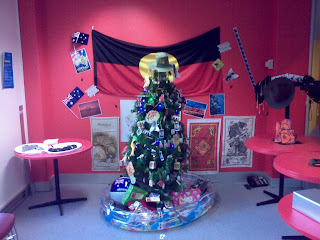 Posted by Adaptive Radiation at 7:43 AM 4 comments: