Riding on the back of WA

So it's true. Western Australia does have a big chip on its shoulder. People here really do feel that the rest of the country is riding on its back. Last night at the conference opening, the chief scientist made the point to tell the international audience that Western Australia makes up a third of the continent and contributes to 40% of the country's export earnings (before showing us all cute slides of kangaroos and quokkas).
Posted by Adaptive Radiation at 8:44 AM No comments:

A whole bunch of babies

Went to Freemantle yesterday by train. The Freemantly line also stops at the Showgrounds for the Perth Agricultural Show. The train from Perth city was packed...full of young mothers and babies. I found it amusing that a "family ticket" to the show was for "two adults and five children". My Western Australian friend tells me that WA is a good catholic state. Judging by all the screaming children, I can see that he is probably right.
Posted by Adaptive Radiation at 8:40 AM No comments:

I touched down in Perth yesterday for a week long conference. Some interesting observations:

1. The taxi driver that took me to my hotel was complaining about Perth being a racist city. I thought this was a rather strong statement to be making but I'm not surprised. The driver's comments were certainly consistent with the last time I had visited the city; back then, about 10 years ago, I noticed anti-immigration propaganda plastered on lamp posts. Unfortunately, this time round, I've already heard more racist comments in the two days I've been here compared to the last 5 years I have been living in Melbourne.

2. There are a lot more luxury brand stores in the CBD. My Western Australian friend says that this is a city full of cashed up bogans. I guess he may be right.

3. Tattoos are big in Perth. Guys here like ink blazened across bare torsos and chests (ala Ben Cousins).

4. The public transport system is fantastic. True, there was a strike on the trains the day I arrived but Perth has a touch-style card system that actually works (cf Melbourne's myki) and the trains actually seem to run on time!

5. The Art Gallery of Western Australia is superb. It's a small art gallery compared to most other State Galleries but it has an amazing collection.

6. The public aquarium is one of the best in Australia, rivaling the much lauded Sydney Aquarium.
Posted by Adaptive Radiation at 10:17 PM 2 comments:

I had the münchner schweinshaxe.... It was hard to resist a good pork.
Posted by Adaptive Radiation at 6:45 AM 1 comment: 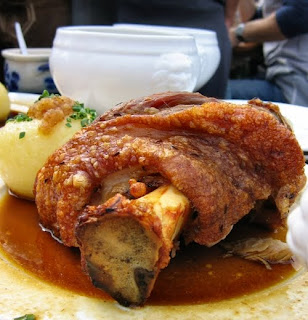 I'm off to the Hofbrauhaus for dinner tonight. For the uninitiated, The "Hof' is a German restaurant specializing in Bavarian cuisine. My heart (in an emotional sense, rather than physical) is telling me I should order the "münchner schweinshaxe" (pickled and roasted pork shank)....It's hard to resist the crunchy crackling and the salty, melt-in-your-mouth morsels of slow-cooked flesh. Problem is my head (and my doctor) is telling me I should choose the fish option. Hmmm...what a dilemma. I worry I will give in to weakness... just the mere sight of the above photo is making my mouth water in anticipation.
Posted by Adaptive Radiation at 5:00 PM No comments:

What a weekend. It started on Friday with a work meeting to discuss a new scientific experiment involving mate choice in humans. If successful, we will hopefully get an answer to an age-old question: does size really matter? ...Stay tuned.

Saturday night, I went to the Greyhound Hotel with one of my research collaborators. It had nothing to do with science. We just wanted to go and see the drag performance. I've probably mentioned this previously already but I really like the people that go to the Greyhound... Diverse. Happy. Fun.

On Sunday, Nate and I went out to a restaurant in Reservoir to celebrate a 1-yeor old's birthday. Three interesting observations. First, people out in suburbia are, on average, 15 kg larger than their inner city counterparts. Second, restaurants catering for suburban clientele serve up bigger food portions on larger plates than inner city restaurants. Third, people living in suburbia have more children than those who dwell in the inner city (there were at least 4 other kids birthdays on that day).
Posted by Adaptive Radiation at 5:21 PM 3 comments: 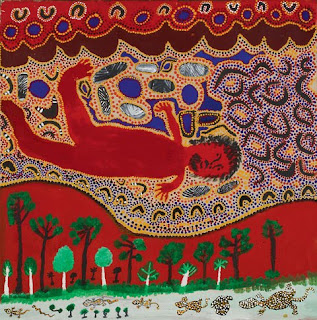 The Canning stock route exhibition at The National Museum of Australia was definitely one of the highlights of this weekend's visit to Canberra (aside from the usual wallowing in excessive feast...but, as usual, I digress).

The stock route, which runs over 1900 kms in length from Wiluna to Halls Creek, goes through the Western desert region of north-western Australia...and the traditional lands of aboriginal peoples. 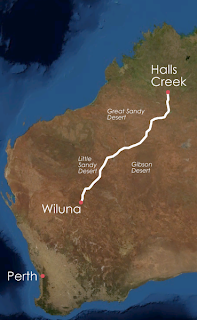 Here is a story with both a white and black perspective. For the former, it is a pioneer story about getting cattle across a vast tract of inhospital land and hostile locals. The route was established by Alfred Canning at the turn of the 20th century with much help from local aboriginals. Some 52 wells were sunk along the route for the cattle and drovers. 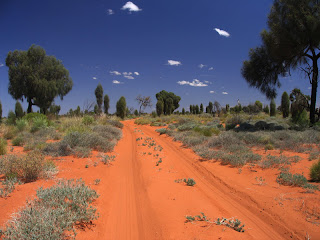 The aboriginal perspective is very different. Without a doubt, the route would not have been established without the help of local aborigines (many of whom were forced to work for Canning and his crew against their will). Traditional owners were dispossessed and sacred sites were irrevocably ruined. But the aboriginal stories, as told through their vibrant paintings, also speak of resilence and, ultimately, keeping culture strong. 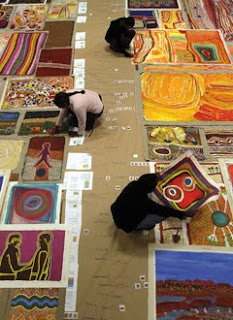 Posted by Adaptive Radiation at 9:21 AM 2 comments:

A couple of weekends ago I was in Sydney visiting friends. This weekend I'm in Canberra visiting my folks. I'll be visiting Perth later in the month for a conference. And am also planning trips to Hobart (for fun), Brisbane (for Valentino) and Adelaide (for fieldwork). Now I just need an excuse to visit Darwin.
Posted by Adaptive Radiation at 7:46 AM No comments:

In contrast to most people, I don't mind bus drivers, especially the ones that take me between the train station and my work. The regulars always wait for me if they see me running towards the bus and yesterday I actually had a decent conversation with the driver on the way to the train station about, of all things, abstraction (the driver is also doing a Masters in Fine Art). So...Melbourne bus drivers are both learned and kind.
Posted by Adaptive Radiation at 8:19 AM 3 comments: