Nathan's dad was admitted to Frankston hospital a couple of weeks ago. He seems to be making a good recovery.

I had not spent much time in Frankston before but recent visits have been a bit of an eye opener. People there seem to be quite a bit less healthy that those living in the inner city. There were a lot of overweight people around.

The food was terrible. We ate at the food court of the shopping centre twice. Both times, the food was really salty. Yesterday, we went to a charcoal chicken place and the food there was heavily laden with salt as well (almost to the point of being inedible).

As I sat there chewing on my chicken, I was wondering if there are higher incidences of heart disease, blood pressure etc in that part of the city?
Posted by Adaptive Radiation at 6:50 AM 1 comment:

All the pretty ones pashing on the dance floor

Took my Canberra visitor to the Greyhound last night. I wanted to show him the transformation.

He was shocked. He made similar observations to the ones I made after my first visit to the venue after refurbishment.

It looks amazing but has lost some of the soul. The people on the dance floor were less diverse (far more attractive looking but less nice somehow). There was only one drag queen performing last night – and she was most definitely an after thought, playing second fiddle to the beautiful girls and hunky guys who did most of the miming and dancing around (the shows were short too).

Anyhow, I don't want to sound like I am complaining because I still had a great night. And I am not blind to commercial realities either. Reinvention is often necessary for survival. Perhaps I am just getting old and sentimental.
Posted by Adaptive Radiation at 9:27 AM 1 comment: 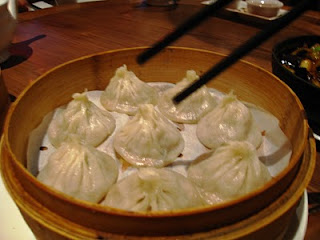 Went out for dinner last night at the Hu tong Dumpling Bar. I've heard people ranting and raving about this place for quite some time now (from food critic Matt Preston to the guy I see everyday on the train). This restaurant's reputation is well deserved....the 'xiao long bao' were absolutely amazing (the best I've ever tasted).

I had a very nice catch up with my former PhD student and his co-supervisors. It was funny leaving the restaurant though. All four of us are extremely tall and I heard one waiter make a comment about our heights to another (in mandarin). And as we were leaving, I noticed a lot of the customers staring at us. I must say it is refreshing to be surrounded by people that are the same height...I feel less freakish that way.
Posted by Adaptive Radiation at 6:50 AM 3 comments:

I have someone staying with me this week. He is in Melbourne working with me on an experiment. It has been an eye-opening experience. He doesn't seem terribly motivated and appears to be more concerned about having lunch than doing the experiments (even though it is his experiment). Sigh.
Posted by Adaptive Radiation at 6:35 AM 1 comment:

The mould, the mould

The builder came. He is what I would describe as a typical 'wog' (and I mean that in the nicest possible way). Shaved head, athletic build, tight designer shirt and jeans, nicely perfumed, and wearing lots of heavy gold jewellery. He prized off the skirting board and I was amazed to see the assortment of fungi growing on the wood. My damp problems is a mycologist's dream. "Definitely a damp problem", said the builder. He cleaned out the mess and said he's going to get back to me in a couple of days.
Posted by Adaptive Radiation at 6:06 PM 4 comments:

My apartment was built in 2005 and I moved in very soon after it was completed. Almost immediately, I started noticing a funky damp smell. I told the builders when they came in to fix up the apartment defects but they assured me it was just the dishwasher (which I have never used).

Since that time, the skirting near the sink has been deteriorating. The paint bubbled and the wood is expanding and then mould started to grow. Things came to a head last year when an overseas friend came to stay. I found him the next morning sleeping on the balcony. Apparently he had suffered an adverse reaction to the mould and spent the rest of his time in Melbourne staying with other people. I felt terrible.

Anyhow, I told our onsite manager earlier this year. He inspected the damage and suggested that there was definitely a leak under the kitchen bench somewhere. He said he would contact the builder.

Six months passed and then, last night, the builder gives me a call. He will check it out this morning. I hope he can identify and fix the problem.
Posted by Adaptive Radiation at 8:14 AM No comments:

In a city of 4 million, what are the chances of crossing paths with the same bigot in just over a month? 'Pretty good' it seems.The woman who was making racist and homophobic remarks at Nathan and I at Prahran station a few weeks ago hopped onto my train this afternoon at Flinders Street. I recognised her two jack russells. So it seems that she is just generally a crotchety person. As she walked through the carriage, she made nasty comments at several commuters.
Posted by Adaptive Radiation at 6:34 PM 4 comments:

Why do I bother?

Students nowadays seem to have very selective hearing. Maybe they have gone deaf from listening to their iPods all day.

Student # 1 (before the start of the lecture yesterday): "Are these lectures examinable?"

Me (to the rest of the class): "Just a reminder, as I have said before, these lectures are examinable".

Student #2 (at the end of the lecture): "Is this lecture examinable?"

A car literally flipped onto its side and screeched to a halt right in front of me on my way to the train station this morning.

I immediately ran up to the vehicle. The airbags had been deployed, the front windscreen was smashed, and the driver was trapped because because the driver's side of the vehicle was laying against the road. Someone opened the front passenger door (now facing the sky) to ask the passenger if she (I think it was a woman) was ok.

I noticed a crumpled bike lying on the road a few meters behind the car. I didn't see a bike rider so hopefully it wasn't a collision and that the rider wasn't squashed under the car.

A man asked if someone could go find a fire extinguisher (just in case) so I ran to a nearby cafe and got one. I placed it next to the car.

By now, several people were on the phone to triple 0 and a sizeable crowd had gathered. I had a lecture to deliver, so I continued on my way to the station.

What a way to start the morning.
Posted by Adaptive Radiation at 10:23 AM 4 comments:

A barrage of emails have appeared in my inbox over the last few days. There was an assignment due last week and students are contacting me with all kinds of reasons why they shouldn't be penalised for not handing in their work on time.

I received a couple of emails with the stock-standard excuses.... illness or bereavement due to the unfortunate passing of beloved family members (grandparents seem to have a nasty habit of dying at this time of year).

But this year, I've also had a few new excuses I have not encountered before. These include:

Evidently, I'm a bit of a softy when it comes to giving students the benefit of the doubt but I'm starting to get a bit suspicious.
Posted by Adaptive Radiation at 9:32 PM 5 comments:

My book is almost ready and I am having separation issues. The publisher has set up a site for my coeditor and I to upload the chapters and I am procrastinating. I should just do it. In truth, I think it will be a huge weight lifted off my shoulders. It's been a three year long process from inception of idea, to writing the proposal, to getting scientists to contribute chapters, and finally putting the whole mammoth thing together. I don't think I'll do another one for a while. It was a lot of work. Ok, better get to it...
Posted by Adaptive Radiation at 9:23 AM 2 comments: 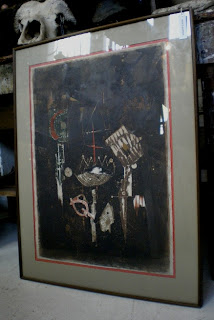 Nathan and I bought this lithograph last week. We have no idea who the artist might be or whether it is even Australian. The work bears the letters EA on the bottom left corner and a signature – but we can't make out the letters. This is going to be a difficult one to resolve.
Posted by Adaptive Radiation at 9:05 PM No comments:

Early paintings from the western desert

The recently opened exhibition of early aboriginal paintings at NGV Australia is a must see.

The exhibition showcases 200 or so of the earliest works produced from the western desert. These early paintings are significant for giving rise to the western desert art movement. The works themselves (most of which were painted on board) are absolutely breathtaking.

There is a great sense of power and spirituality in these paintings that set them apart from the more commercial works in the decades to follow. Intriguingly, several of the works were held in a special room separated from the rest and came with a sign warning that they may not be suitable for general viewing due to cultural sensitivities.

I know I am biased (given my interest in aboriginal art) but this is really something special. Click here for a video about the exhibition.
Posted by Adaptive Radiation at 9:39 AM No comments:

A definite highlight of my day off yesterday was catching with fellow bloggers Victor and Evol Kween for lunch.

Victor and I had previously discussed meeting up for pho in Sydney but seeing as he was in town, we decided to go for pho here instead.

I must say that it was terrific to finally catch up and meet people whose blogs I had been following for years. Importantly, they were both super nice and the conversation flowed freely....it was like catching up with old friends.

Sadly, EK had to get back to work, but Victor and I ended up extending our catch up a bit longer over scones at the NGV. We said goodbye 4 hours later.

Am already looking forward to the next outing...
Posted by Adaptive Radiation at 9:23 AM 3 comments: