St Kilda and the homoerotic portrait

The weather here in Melbourne has been really crappy over the past few weeks so Nate and I decided to make the best of a break in the weather on Saturday with a little outing to St Kilda. We started off with a nice lunch at Beachcombers, a seafood restaurant near the St Kilda pier. Observing the waiters at the restaurant made me wonder about their staffing policy. Don't get me wrong, the service was excellent but it did seem that the restaurant only hired overseas students/travellers as waiters. Are they cheaper?

After polishing off our fisherman's baskets, we wandered along Acland Street and made our way to one of my favourite second hand furniture shops aptly named, "The Bitch is Back" followed by a stop over at a nearby gallery that was holding an exhibition of homoerotic paintings. I include one of the (tamer) images below and leave the art crtique to the readers of the blog. 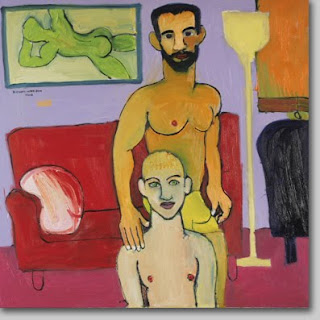 I must admit that I thought this one was quite nice. Cheekily, I turned to Nate and suggested we should get it. Nate recoiled and threatened to leave me if I ever bought something like that home (I guess Nate was never much into bears). I smiled. Nate and I were both a little bemused to see that one of the most obscene of the canvases - a naked guy with a bright yellow (erect) penis - had already been sold. I wonder what sort of a collector would buy such a piece? Surely not someone ultra-conservative. In my mind, I pictured a flamboyant elderly gentleman who lives in an expensive penthouse apartment on St Kilda Road. What do you think?
Posted by Adaptive Radiation at 5:46 PM

I couldn't help myself. I fell in love with it the moment I laid eyes on it, so I bought it. Is that so bad?

Will you be passing it on to your mother, Mutant, in exchange for the cabbage she and your Dad gave you?