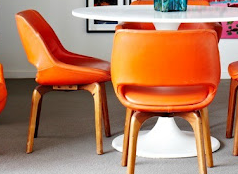 I can't believe my luck. Yesterday, when I was on my way to meet a friend for lunch, I decided to drop into the Chapel Street Bazaar. Lo and behold, I see a pair of orange vinyl dining chairs that look identical to the ones I have at home...except you can actually SIT on them! Of the four I have at home, one has a broken leg, and two have broken backs. For quite a while I've thought about tossing my old chairs out and buying new ones but ever since the photo shoot for The Age (and all the positive feedback from friends and strangers alike), I've been reluctant to let them go. Now, I have the possibility of buying two replacements and to send two of the broken chairs into storage (until such time that I can get them restored). Hmmm...I just hope I haven't tempted fate by not buying them right away (just had to confirm that they were, in fact, identical).
Posted by Adaptive Radiation at 8:03 AM

Oh no! See them, buy them. Hurry back quickly and grab them.

The good news: I went back and they were still there. The bad news: one of the chairs has a dodgy back just like a couple of my existing chairs. I decided not to take them.

Sounds like they are more show than practicality but still...if you love them....