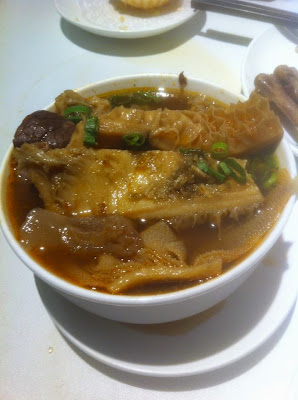 By the time I had finished, it was already midday so Nathan and I decided to head into the city for lunch.

We settled on yum cha on Bourke Street at Shanghai Dynasty, which has the most garish decor of any restaurant I have ever seen.

I couldn't resist the beef offal stew, which contains tendons, tripe, and lungs. Nathan thought it was disgusting (says the guy who was happily munching on the braised chicken feet).


Posted by Adaptive Radiation at 5:20 PM

Offal is awful and so are chicken feet, unless you are a chicken and need them.

They are definitely an acquired taste. I found the lung a bit confronting but the other bits and pieces were fine.

I thought you would have developed a taste for more exotic Asian foods Victor given your time in Asia.