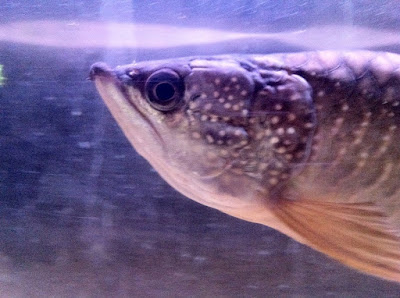 This is my pet saratoga (Scleropages jardinii). I've had him (her?) for over 18 years and he was already a subadult when I bought him. Jandamarra (that's his name) lives with my folks in Canberra in a tank all on his own.

He's a very aggressive fish. I've tried keeping him with other fish in the past without much luck. He earlier bit my finger when I was cleaning the tank. Nothing serious but you can see the scrape marks left by his teeth. I don't think he meant to do it...just mitook my finger for food.

A couple of years ago I had to fly back to Canberra because his previous tank had sprung a leak and I had to transfer him to the current aquarium. It's smaller than his old tank but it's big enough for one.
Posted by Adaptive Radiation at 9:00 PM