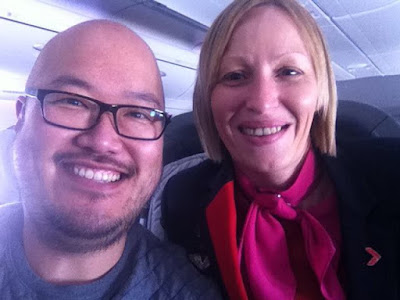 Two years ago, Nathan and I went to the US. We took a couple of weeks off to travel before going to New York where I had to attend a conference.

On our way to the US, we had a fantastic flight attendant, Tash, who looked after us extremely well. Coincidentally, she was on the same flight when we flew back to Australia several weeks later. We really hit it off. We found out that Tash was based in New Zealand and in the period that we were in the US, she had also gone on an American holiday with her friend. Ever since, both Nathan and I joke about bumping into Tash again.

Well...it happened. On Monday, I flew to London via Dubai to attend the very same international conference as the one I attended in New York in 2014 (this year it's being held in Exeter). During the Dubai-London leg, a flight attendant came by to pick up my plates and she looked like Tash. When she walked past again, I called her and, sure enough, it was her! The chance encounter was all the more remarkable because I had been in Business Class this time and Task was working in Economy and happened to come to the upper deck to lend a hand.

Posted by Adaptive Radiation at 4:50 PM

Quite remarkable. It is a small world among you jetset travellers.

Extraordinary coincidence. If I have flown with the same attendant multiple times, then I am quite unaware of it.

I'm usually terrible recognising people but Tash was terrific at her job and hard to forget.