I went to the Queen Vic markets yesterday with the intention of getting some seafood.

To my surprise, one of the vendors had these for sale (albeit a less colourful variety than the one in the picture): 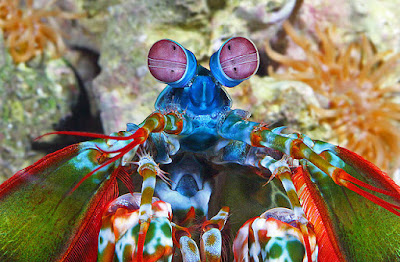 The creatures are called mantis shrimp, so named because they have appendages that resemble the arms of the praying mantis. They use these appendages to strike at their prey (such as crabs) with such force that mantis shrimp are even capable of smashing glass. Disconcertingly, they are also known by another name: 'thumb splitter'.

Needless to say, I couldn't resit the temptation of giving the thumb splitters a try and bought a few to cook up for my Saturday lunch. They were super tasty.
Posted by Adaptive Radiation at 7:48 AM

I find it difficult to imagine what is pictured as food! You are more fearless than I.

Pretty to look at but not for my consumption.

I love lobster, crab and prawns. I figure if it's a crustacean, how bad can it be?