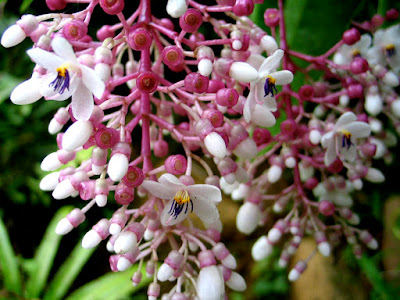 I got up super early in anticipation of a 'rare plants' sale at a nursery in Fitzroy.

I caught the tram from my apartment  and arrived at the nursery 6 minutes after the 8.30am opening, only to discover that the shop was already packed...mostly with hipsters.

A nursery worker was handing out numbered tickets because they were trying to control the mad rush (which was very wise) and were allowing only 20 people up to the 'rare plants' section at any one time.

I have to say that the thought of having to wait was tempered by the sight of so many plant enthusiasts. For most of my life, growing house plants was definitely not cool. How times have changed. I guess I should be grateful to the hipsters.

An hour later, I was heading up the stairs. A lot of the plants had already been sold but I managed to pick up a giant chandelier plant (Medinilla), which hails from the mountainous rainforests of the Phillipines. It was the last one left (phew).

I then had to drag the monster of a plant (it is over a meter tall) back to my apartment by tram in the rain.


Posted by Adaptive Radiation at 5:11 PM