While Nathan was busy climbing the Sydney Harbour bridge today, I strolled from Circular Quay back up to Paddington to check out an aboriginal art gallery that I had difficulties finding a couple of days ago. This time I wrote down the address on a scrappy piece of paper and managed to find the gallery hidden behind a laneway. I spent the next hour with the gallery staff rummaging through their collection of bark paintings. I was particularly interested in works by a senior Kuninjku artist from Western Arhem land by the name of Mick Kubarkku who passed away recently. Kubarkku painted rather whimsical-looking spirit figures and totemic animals. His paintings are held in all of the major public galleries in Australia (the National Gallery of Australia recently bought a number of his works for their collection) and are quite pricey and hard to find (Kubarkku stopped producing works a few years ago due to ill health). To my absolute surprise, the gallery had two of his paintings for sale and, even more surprising, they were actually affordable. I bought the echidna pictured below. 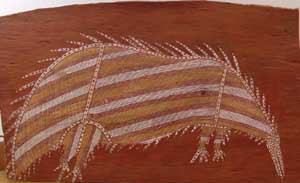 I met Nate afterwards back at Circular Quay at the Museum of Contemporary Art where we shared the world's most expensive salt and pepper squid. We then made our way to Paddy's market where Nate decided to indulge in a massage. I left him in the capable hands of the chinese masseuse and headed over to the fruit section where I bought two of these. 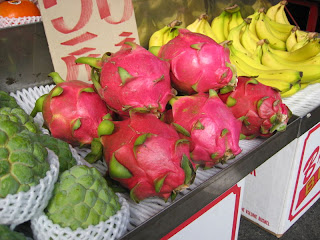 They are called dragonfruit and belong to a species of epiphytic cactus native to Mexico. It has the most amazing magenta-coloured flesh.

Caught up with my cousins for dinner. We had planned to try a Malaysian roti place but it was packed and the queue outside wasn't really moving so we went to Menya, a japanese ramen place. 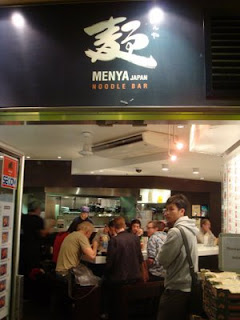 I was extremely tempted in taking up their Godzilla ramen challenge. The rules were simple. Cosume a bowl of their Godzilla-sized ramen in 30 minutes and it's free. Sounds easy? Well, it's not. The Godzilla ramen is 4 times the size of a normal serve of ramen and weighs in at an impressive 2kg. I was tempted but chickened out at the last minute and opted for a 'mega' ramen instead (which was merely 2 times the size of a regular serve).
Posted by Adaptive Radiation at 8:47 PM

I live in Sydney but have yet to visit the Museum of Contemporary Art. I should really pull my finger out and get into it, especially as I regularly patronise the nearby Dendy Cinemas on the other edge of the Quay.

It's quite a nice gallery. Just don't eat at the restaurant...it's a rip off.

Is the Malaysian roti place called Mamak? It's actually opened by a few of my high school friends who gave up their day job and went over to Malaysia to learn how to spin the roti, etc. It's been hugely successful.

So how did you go with the 'mega' ramen? Did you finish in 15 min given it is half the size?

Yep...Mamak. You should have gone into partnership with your friends! The queue was unbelivable. It took me much longer than 15 minutes to finish my mega ramen. I need to work on my noodle slurping skills.