The health benefits of aquarium fish are well documented. Gazing into a fish tank, even an empty one devoid of any fish, has been shown to reduce stress and lower blood pressure.

Regular readers would know that I am a scientist and that I do research on fish. However, since taking on an academic position, I'm finding that more and more of my time is being absorbed into teaching and administration. As a result, I am finding less time for research (i.e. staring at fish) and I think these changes are taking a toll on my stress levels. Fear not, my friends; I'm trying to remedy the situation.

A few years back, I was given a huge aquarium. It takes up about a fifth of my office. I dont actually look at the tank much. The lighting was crap and I had only a single fish living in it (Sam, the saratoga). A few months ago, I decided to replace Sam (who was beautiful but way too belligerent) with a more peaceful bunch of 'community' fishes and fixed up the lighting so the tank is now looking a whole lot brighter.

I started off with six of these. 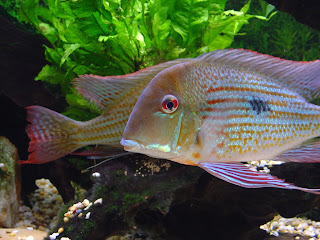 They are called Eartheaters. As their name suggests, mine spend a lot of time poking their snouts into the sand in search of food. They are really fun to watch (I think my work productivity is going to drop).

I also got one of these. 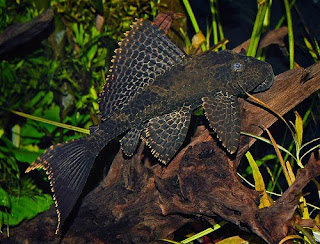 It's called a sailfin plec. Mine spends most of its time plastered to the side of the tank with his (or her?) cute sucky lips. I've been feeding it slices of boiled zuchini which I throw into the tank in the late afternoon (Plecs are nocturnal). Mine is still a bit shy (though I have ocassionally seen it swimming around the tank when the office and tank lights are off).

These are banded leporinus. I have one in my tank whom I've named Dr. Zeuss. 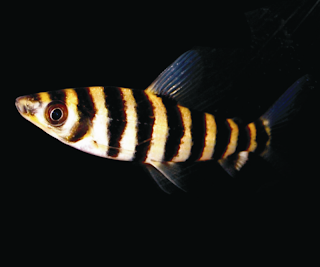 This is a giant pencilfish. I've called mine Mr. Squiggle. 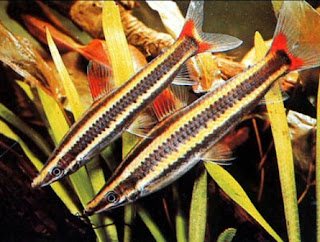 The latest addition is Miffy, a fish that is popularly known as a silver dollar (though, in reality, the one I have is the size of a small tea cup saucer). These fish belong to the same family as the infamous pirhana. Miffy, however, is a vegetarian. 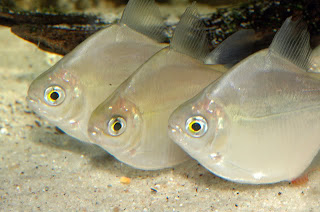 Posted by Adaptive Radiation at 8:32 AM

Ah, it takes me back to the aquarium of my childhood. Is that why I was such a laid back kid?