There were no flight cancellations, not by Cathay Pacific at least. A typhoon had just brushed past Hong Kong so there were delays in and out of the airport. My Finnair flight into HK was delayed and the landing was a bit rougher than usual but fortunately my flight from HK to Melbourne left on time.

I got in early Friday morning. It was interesting to hear the pilot mention over the PA system that there are sometimes laser attacks at this time of the morning. I find it hard to believe that someone would get a kick out of pointing laser beams at airplanes.

It was nice to be home. After a quick nap, Nathan and I went to see the new Living Waters exhibition at the NGV. The exhibition comprised a collection of indigenous art from the western desert gifted to the gallery by the Felton bequest as part of the 150 year celebrations. 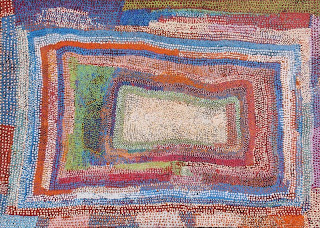 After a nice afternoon tea at the nearby NGV international afterwards, I had to go home for another nap (probably not such a great idea for getting over the jet lag). I woke up at noon today. I seem to be sleeping a lot this time. Hopefully I can shake off this jet lag by Monday.
Posted by Adaptive Radiation at 7:12 PM

Jet lag soon wears off, all it needs is the laundry run and clearing those pesky bills that built up in your absence.

Unfortunately, he cant help with getting me to sleep before 3am though.