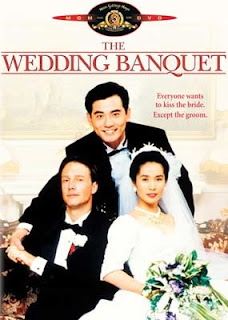 I headed up to Sydney for the second wedding up there this month. This time it was my cousin's....an Asian wedding.

There are a lot of rituals attached to a big chinese wedding, like the tea ceremony, which involves the bride and groom kneeling in front of senior family members offering them tea in return for red packets and jewellery. And like all chinese weddings, there was drama...in this case, the maid of honour unfortunately fell over during the post wedding photo shoot somewhere at the Botanical Gardens, necessitating a trip to the Emergency room.

The wedding reception was in Bankstown. It was like a scene out of Ang Lee's film, the wedding banquet (though, in this case, the groom is straight). The banquet dishes featured the body parts of endangered species (e.g. sharkfin soup); the fathers of the bride and groom got way too drunk; there were people falling over on the dance floor (is it appropriate to play kung fu fighting at a chinese banquet?); and one of my cousin's threw up on himself on the bus ride home.

Of all the weddings I have been to in the last three months (and boy were there many), this was by far the craziest. I had a great time though!
Posted by Adaptive Radiation at 11:30 AM

Sounds wonderful! I recall 'The Wedding Banquet' fondly. It was a very funny and charming movie.

I had to watch it years ago so I could figure out how to say 'homosexual' in chinese when I came out to my dad!

I hope it provided the correct dialect for you!

We speak multiple dialects at home and the main one was close enough to the mandarin spoken in the movie that I could figure it out ;-)