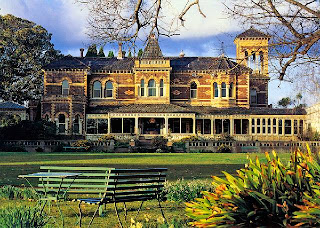 We took some friends to the Ripponlea mansion the other day. The building was donated to the national trust in the 1970s and is quite spectacular. Unsurprisingly, it is frequently used in films and is a popular wedding venue.

We went on a tour of the mansion itself. It seems that the last owner made a lot of changes...but not necessarily for the better. She painted over the original gold-leaf wall paper and the marble columns, removed the french doors, and knocked down adjoining structures to put in a pool. Some of the other people on the tour were quite critical.
Posted by Adaptive Radiation at 8:04 AM