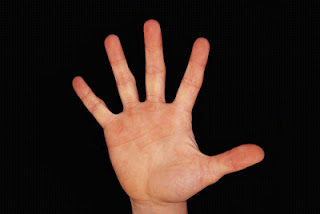 I recently saw a video of myself giving a public lecture. It's an interesting experience, watching yourself talk. There is the voice that is not immediately recognisable as my own. And there are idiosyncratic physical gestures too...the smile, the posture, the tilt of the head, and...the flamboyant hand movements. Man, am I really that gay? Scientists have shown that there are, indeed, behavioural differences between gay and straight men in the way that we gesture. I guess non-scientists who pick up on those cues call it gaydar. There are important morphological differences as well. The most intriguing is the difference in the so called 'second-to-fourth-digit' ratio between gay and straight men. Imagine my horror a few years back (when I was not yet out of the closet) when a colleague asked to see my hand. After inspecting it thoughtfully, she declared "you're gay". Don't believe that a man's hand can reveal his sexuality? If you're a bloke, do the test yourself. Lay your hand on a flat surface with the fingers close together. Which is longer? The second digit (i.e. index finger) or the fourth? Compared to a straight man, the index finger on a gay man should be longer than the fourth digit. Not quite sure how this would work for men that sit somewhere in the middle of the Kinsey scale.
Posted by Adaptive Radiation at 5:38 AM

Interesting. The fourth finger is slightly longer on my right hand and the tiniest bit longer on my left hand.

Hahaha. I've heard that it's an indication of the goods down below. A longer fourth apparently means... well... 'green light'. Clearly, I'm writing this only because my fourth is longer than my second.

Hurray for Andrew, Victor and I.

And no, there will be no girls at this traffic light.

immigayrant: I think the fewer people who views the video, the better.

Tim: You're right. There was a study carried out in Korea by a bunch of scientists who "stretched out" the penises of a bunch of Korean men and found a relationship between 2D:4D ratio and penis length. You could, of course, try to replicate the study in Australia. Could be a nice scientific paper in it.