Was back in Canberra over the weekend. I left on Friday and returned last night. I hadn't realised that Monday was actually a public holiday in the ACT: Family and Community Day.  What a wonderful excuse for a public holiday.

I went with my youngest sister to the Malaysian embassy on Saturday as they were having some sort of celebration/open day. After buying some traditional Malay desserts, we went for a walk around some of the other embassies and noticed that quite a few were open to the public that weekend. Here I am in front of the Finnish embassy. 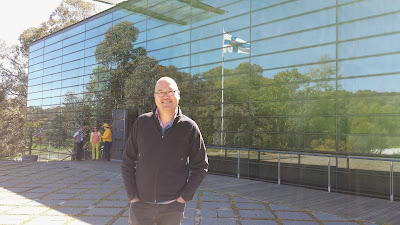 More generally, there seem to be a lot of activities going on in the nation's capital as part of its centenary celebrations. Though I missed it, Floriade this year was supposed to have had a centenary theme. The art gallery was also full of new pictures donated from various sources as part of its '100 works for 100 years' program.

I know Canberra is often described as sterile but I still have a soft spot for the place where I grew up.


Posted by Adaptive Radiation at 11:55 AM

What I found remarkable about Canberra was that everything was free, National Gallery, Portrait Gallery, War Memorial and Floriade. Melbourne's garden show is a disgrace.

I think public institutions like the NGA and War Memorial should be free given that their collections belong to the people of Australia. This is where living in Canberra has its perks...It was really handy having access to another free resource when I was at uni...The National Library of Australia.

Floriade charged entry fees a few years ago and it was a PR disaster.