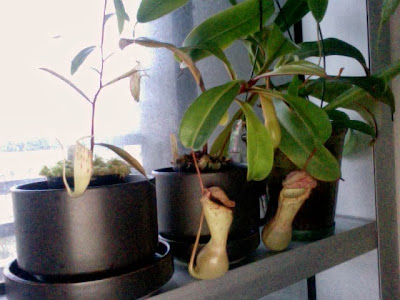 I recently added two new specimens to my 'collection' of tropical pitcher plants. They were bought on ebay following several weeks of unsuccessful bidding – until I worked out the sneaky tricks that ebay bidders use to win their bids (i.e. grossly overpaying in the last 10 secs before bidding ends).

Anyhow, I've had the two new plants for about a week and decided to give them a drink of coffee this morning. Yep, coffee. It seems that tropical pitcher plants are not only similar to humans in the need to eat, but they apparently also thrive when given an occasional hit of coffee.

Unfortunately, not any old coffee will do. They do not like instant coffee for instance. So...being a non-coffee drinker myself, I sent Nathan on a detour to pick me up a long black from Gloria Jeans when he was walking the dog yesterday. This morning I diluted the cold, day old coffee and gave each of the plants a drink. No notable changes yet...but give them a few weeks and evidently I can expect to see bigger leaves and traps.
Posted by Adaptive Radiation at 7:00 AM

So, any time now they will be wide eyed and unable to sleep?

You gave your plants Gloria Jeans coffee? I am so disappointed. I thought you cared for plants. I've never been quite sure that there is actually coffee in GJ's coffee.

Victor: Maybe that's the trick...keep them awake so they can grow.

Andrew: Oh dear. Being a non coffee drinker, I didn't realise I may have committed plant abuse.

Actually Ad Rad the bigger offence you committed was using Gloria Jeans for the coffee. They are financed by Hillsong who are rather anti-gay.

Oh dear...no more GJ coffee for my plants then.