I was hosting a colleague from Sydney this week. He had never been to Melbourne before so I decided to take a day off work to show him around on Thursday. Unfortunately, the weather wasn't terrific but at least there was no rain.

We began our tour of Melbourne with a tram ride to Sonido on Gertrude Street for a South American breakfast. I had the arepa con huevo accompanied by a nice cup of hot chocolate. 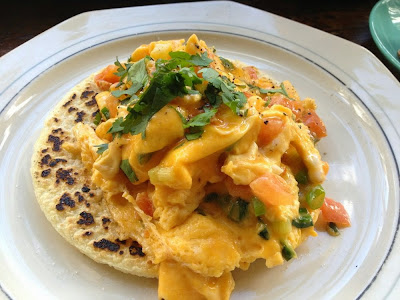 After brekky, we walked along Brunswick Street, before cutting across to the Carlton Gardens so that I could show him the Royal Exhibition Building and the Museum (Because we are scientists, I made sure to point out the research spaces of the Museum from street level). We then continued onto Lygon Street and then The University of Melbourne, where we hopped onto a 16 tram to St Kilda.

When we got to St Kilda, we strolled down to the breakwater to try to look for penguins and water rats. We didn't see any. We walked back up to Carlisle Street and over to Chapel, where we hopped onto another tram and made our way to Victoria Street in Richmond.

My colleague's wife is Vietnamese Canadian and both he and she had travelled widely throughout Vietnam. He had a craving for bun bo hue so we went to Co Do, which specialises in the dish. The restaurant is reputed to serve the best bun bo hue in Melbourne (at least according to a Vietnamese lesbian I once met). My colleague said it was good and comparable to what he had in Vietnam. I was pleased. 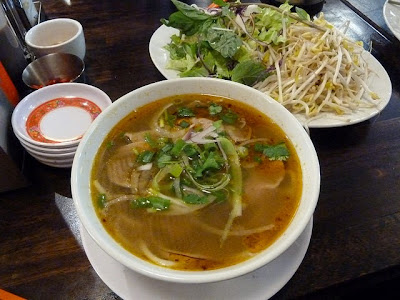 After lunch, we took the 109 tram back into the city. We caught the tram from the dodgy street corner opposite the Minh Phat grocery carpark, which seems to be a haven for drug dealers. There were plenty of sketchy people out that day so my visitor got to see the slightly seedy side of Melbourne (I should have told him not to stare though).

We got off the tram on Collins Street, walked down to Hosier Lane to check out the beautiful street art, before heading over to Fed Square. My colleague needed to get to Geelong for a meeting but we had plenty of time so we decided to walk to Southern Cross Station along the Yarra. By mid afternoon, the sightseeing tour was over. I said goodbye to my visitor at the station and headed home.

Posted by Adaptive Radiation at 7:26 AM

What a great outing for the visitor. I know that Victoria Street corner well.

It was great for me too. I hadn't been to St Kilda for ages.

I must remember that line if I ever go on another date.

'Come with me to the beach and we'll seek out the water rats.'