I've been in Western Australia for the past week for work.

The excitement began at Melbourne airport when I spotted a Qantas plane in the new livery, with the kangaroo sans arms. In the evolution of the company's logo, it seems that the roo is getting more and more minimalist. 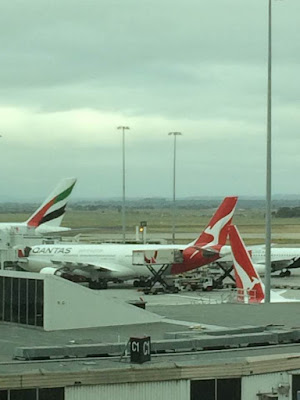 Once I got to WA, I made my way to Fremantle by taxi. The driver was a south Korean dude who works as a taxi driver part time and spends the rest of his life working as a fly-in-fly-out miner up near Newman. Taxi drivers have such interesting back stories.

I was in Fremantle for a conference. Somehow I managed to stuff up my dates so I had an extra day in WA before my flight home so I decided to visit the University of Western Australia.

Wow...what a beautiful campus. They even have a resident peacock! 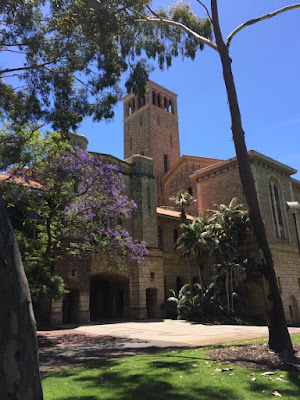 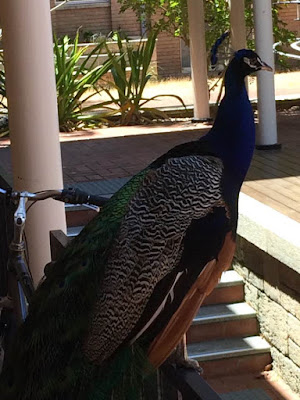 A highlight of my visit to UWA was catching up with a friend I hadn't seen in 12 years. We first met when I was living and working in the USA in 2004. She was a PhD student from Sweden. My friend has since married a Welsh guy, had a baby and settled in Australia.

After my UWA visit, I decided to walk into the city along the river, which took about 40 minutes (I think I got a little bit sunburnt). I then spent the next three hours visiting the Art Gallery of WA. God I love that place. AGWA has a really nice collection (not as large or as comprehensive as the NGV but they do a really good job of putting together their displays and exhibits).

All in all, I had a really nice visit to WA, capped off by the taxi ride back to Perth airport where I had a lovely conversation with the Hong Kong born driver, who used to be a chef.

Posted by Adaptive Radiation at 7:59 AM

We travelled by bus a couple of times along the river and past the university earlier this year. It's a very nice stretch of the river.

I should have caught the bus. Would have saved me from getting burnt!