I made a new friend on the train two weeks ago. I started chatting to her after noticing her marimekko handbag (yes, very gay). I actually thought she might have been Finnish but it turns out she's Norwegian and is here in Melbourne for six months doing graduate research. We hit it off right away...it's nice to have a regular train buddy again.

We made plans to catch up for lunch today. I took her out to Victoria Street for yum cha. She said she was an adventurous eater so I ordered tripe and chicken feet (nathan's favourite), as well as the usual assortment of (innocuous) steamed dumplings. I think she enjoyed it all, even the chicken feet.

Afterwards, we took the tram down to Chapel Street for a hot beverage, followed by a visit to the Chapel Street Bazaar. Nathan ended up buying two old box cameras (he is really getting into all things photography at the moment).

I was tempted by the skull of a male black casqued hornbill. Here is a similar example from the net: 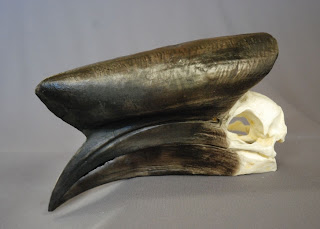 I'm not not sure what I'd do with a hornbill skull (or where I would keep it) but isn't it cool? My new Norwegian friend thought so (she is a biologist too). Nathan thought it was macabre; he doesn't like the idea of dead animals lying around the home so that was that. Oh well.
Posted by Adaptive Radiation at 5:34 PM

I'm with Nathan. No dead bits around the abode.

nor chicken feet either, Andrew.