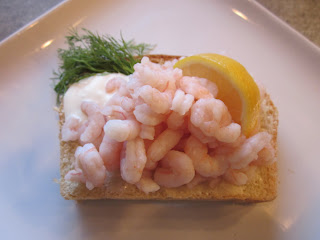 Nathan and I met up with my Norwegian friend a couple of weekends ago at the Swedish Church for the annual Swedish Christmas market.

I must admit I thought it was going to be really lame but was pleasantly surprised. There were heaps of stalls selling all things scandinavian and there was even a petting zoo for the kids. If you're a fan of ikea, you're bound to love the Christmas market.

My friend texted me to let us know that she was sitting near the stall selling Norwegian waffles. We walked towards her but were temporarily sidetracked when we saw the swedish shrimp sandwiches (Nathan's favourite) and had to stop to buy a couple of serves (This was followed by a danish hotdog each and then some Norwegian waffles).

During lunch, I asked my Norwegian friend if she could tell, by appearance alone, if a scandinavian was from Norway, Denmark or Sweden. She said she could and proceeded with an example....

"See that woman taking money for the Danish hot dogs? She is a typical looking Dane."

I glance over and see an ugly, obese woman with squinty eyes.
Posted by Adaptive Radiation at 7:50 AM

Does James O'Brien know about this market? He'll want to hightail it down to Melbourne immediately.

Alas, he'll have to wait for next year. If I remember, I will drop him a message for 2012.