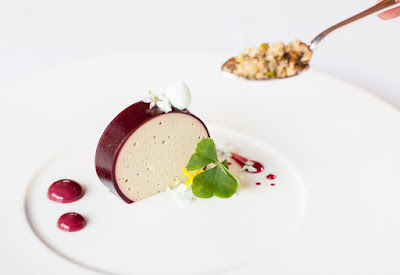 A few nights ago, I went to a French restaurant in Boston called L'Espalier.

I went to the restaurant with three other participants from my organisation. One of the others had chosen the restaurant and I had no idea exactly where we were going or what to expect when we got there.

My initial feeling when I entered was one of apprehension. It was very fancy and expensive, and I felt horribly under dressed (all the other guys eating there were wearing at least a suit jacket).

Apprehension was quickly replaced with one of quiet acceptance though, once I began to peruse the delicious looking degustation menu, which I ended up ordering.

Course after course, the food came. Lobster. Lamb. Fish. Yum. Half the time, I wasn't even sure what I was actually eating (the waiters were very softly spoken) but everything was beautifully plated and tasty and there were a heck of a lot of courses (all delicately presented, of course, onto over sized plates).

Eventually, we came to the cheese platter and the waiter's attempt to explain the origins and qualities of all the different cheeses. And it was around this time that I embarrassed myself.

The waiter, as he methodically made his way around our selection came to an oozy, soft, pale orange cheese which I swear I thought he described as 'pungent with the aroma of dog's feet'. I was intrigued but also immediately thought I had misheard.

So...when the waiter reappeared in our vicinity, I asked him how he had actually referred to the cheese's aroma and he repeated his answer.

'No sir', he said calmly, 'I said pungent with the aroma of God's feet' before going on to explain why. (Don't ask me. I don't know. I didn't quite understand his explanation because his voice was so softy – and also because mid way through his explanation he started speaking in foreign tongue...I think it was French).

Anyhow, cheese plate consumed (God's feet and all), we were about to stand up and leave when the waiter brought new cutlery to the table. Apparently we were not quite done and even more courses ensued...a pre-dessert sorbet, a dessert, a dish I described as a 'post' dessert and then – just for good measure – a cookie in a bag to take home after we had paid and were about to leave.

If I was there I wouldn't know whether the waiter was serious or making it up as he went along.