Canberra and the American Masters 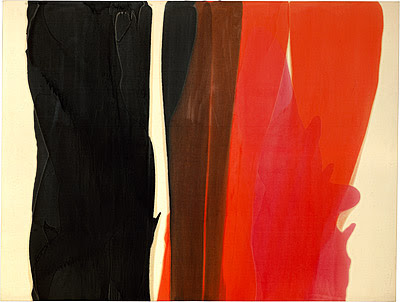 I've been in Canberra for most of the past week.

The original plan was to come up to help one of my students who is doing some work with specimens from the Australian National Insect Collection (yes, the country has a national insect collection and its based in Canberra). Unfortunately the fancy microscope we needed to us was not working so the student flew back to Melbourne and I took a mini 'sabbatical' at the ANU.

It's been great. I got a lot more work done than I would back in Melbourne (lack of construction work noises across the corridor makes a big difference).

I've been catching the bus to and from the ANU. I've probably used the Canberra buses more in the last few days than in the previous 25 years. Canberra public transport isn't the most efficient but it was far easier than what I remember it to be compared to the last time I caught a bus in the ACT.

Today I went to see the American Masters exhibition at the NGA, which is drawn entirely from the National Gallery's own collection. The exhibition really sheets home what a world class collection of American art is actually held here in Canberra. There were heaps of big name artists in the show, from Rothko and Wharhol to de Kooning and Pollock. Of course, Pollock's Blue Poles, purchased during the Whitlam era, is arguably the most well known. I loved the Morris Louis works the best.

The plan after the gallery was to go meet the rest of the family for lunch in the city. Unfortunately, one of my nieces, after polishing off most of a very sizeable portion of chocolate milkshake at a cafe near the gallery, then proceeded to throw it all up over herself and my sister. So, lunch in the city was cancelled and we went home so my sister could get herself and my youngest niece cleaned off.

Posted by Adaptive Radiation at 5:52 PM

Very generous of the family to cancel the lunch because one child threw up on her mother.

The rest of the family still had the lunch. They brought us take away so managed to make the best out of a bad situation.